Earlier this week with little time to make dinner this was the unlikely result: St. George’s, ramsons and red-leaved dandelion leftover pasta with Hosta icicles in Japanese dip.
Earlier in the day I had noticed a patch of St George’s Mushroom / vårfagerhatt (Calocybe gambosa) in the same spot it had turned up for the first time 3 years ago (see St. George’s Mushroom). They were then stir-fried with ramsons (ramsløk) and red-leaved dandelion (Taraxacum rubifolium) and some left-over wholewheat spelt pasta and were served with fried egg on home made garlic toast with a few prawns and some blanched Hosta “Big Daddy” shoots (Hosta icicles) as a side salad with an olive oil /soy sauce dip and the last bottle of St. Peter’s organic pale ale.  LIFE IS GOOD!

The best of spring in one sitting. In celebration of the country Norway, we yesterday (17th May) harvested a small selection of the best blanched perennial vegetables (apart from the ostrich fern which had to be harvested or it would have been too late). This included three udo species (Aralia cordata, Aralia californica and Aralia racemosa), sea kale (Crambe maritima), Hosta “Big Daddy” together with delicious sweet blanched ramsons (Allium ursinum) . They were all eaten raw (apart from the fern which was steamed for 10 minutes) with a Japanese dipping sauce – olive oil (should have been sesame), tamari (soy sauce) and roasted sesame seeds. These accompanied an onion soup prepared with half of the leaves from one plant of Wietses Onion, a vigorous hybrid of Allium pskemense and Allium fistulosum!
It doesn’t get much better than this!  More information with the pictures:

The first winter shoots were harvested from the cellar today. It is almost totally dark in the cellar and currently about +6C. The blanched shoots in the picture are (from L to R) dandelions (løvetann), perennial kales (flerårige kål) and catalogna chicory (sikkori). Otherwise you can see Korean celery (Dystaenia takesimana), perennial celery / fool’s watercress (Apium nodiflorum), turnip (nepe) , carrot (gulrot)  and lemon balm (sitronmelisse).
The salad was decorated with Begonia flowers from the living room! 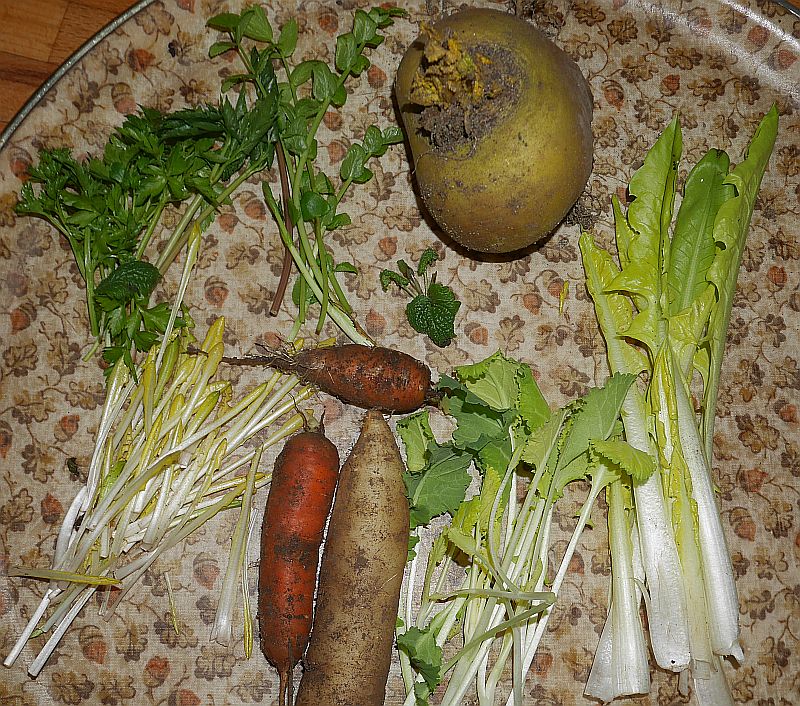 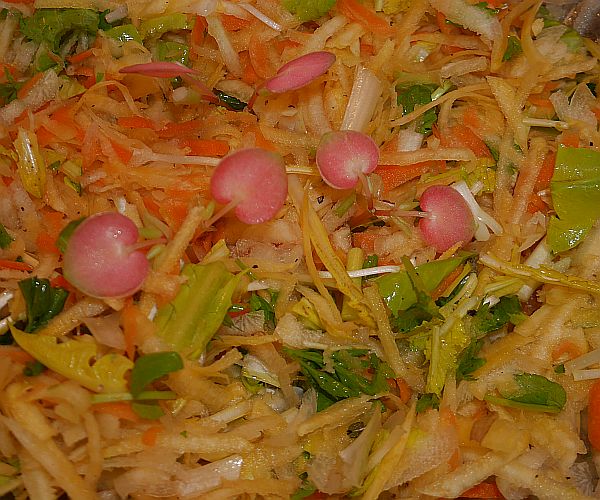 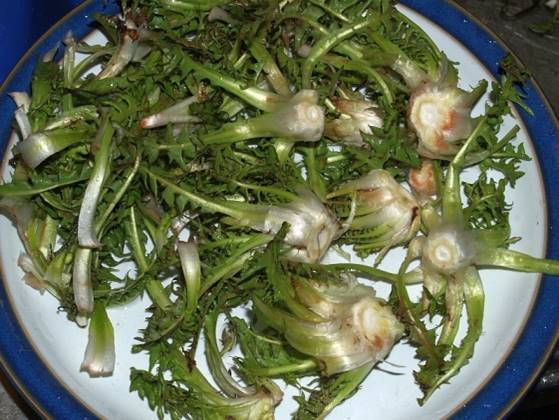 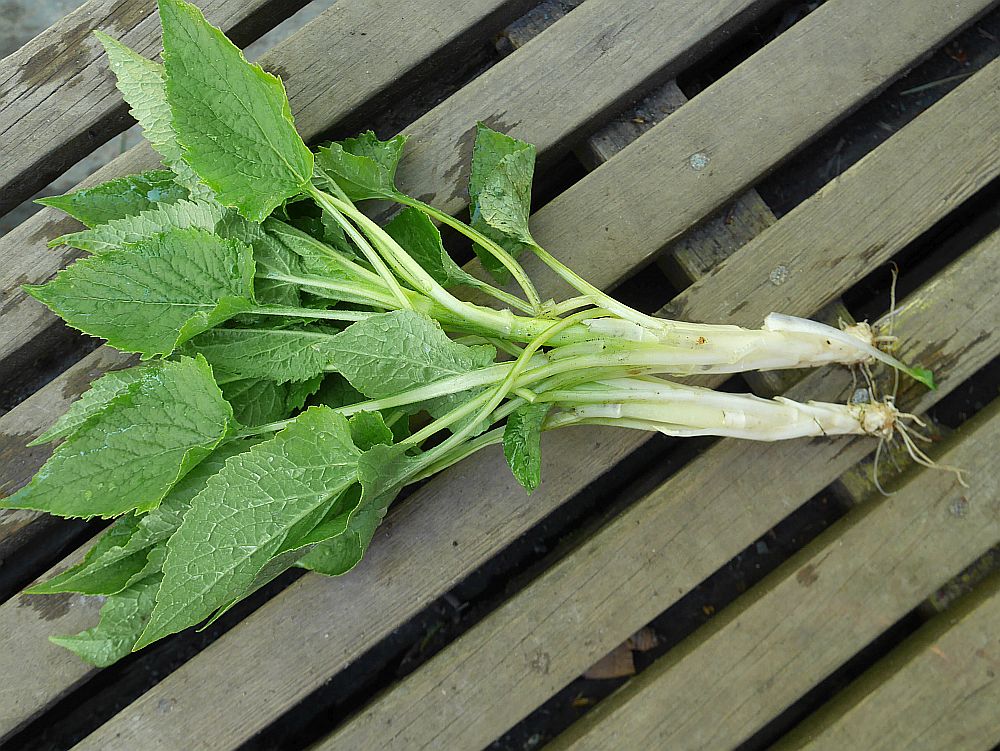 The last roots I harvest in the autumn are perennial vegetables for eating in the winter. I usually do this as late as possible and some years harvestng involves breaking through the ice with a pick axe! With daytime temperatures of -7C forecast for next week, this may be the last chance! Yesterday was the annual horserdish (pepperrot) harvest….the big roots are for forcing young shoots as a vegetable (usually blanched) and the younger roots for grated horseradish! An annual dig also serves to limit the spread of horseradish which can be a problem in some gardens!
See my webinar from last winter on winter vegetables here: https://www.youtube.com/watch?v=sf1ucsGrU2U
Dandelions are one of my favourite winter perennial vegetables. During the summer, wild dandelions sow themselves on my cultivated beds….one of the advantages of having too much open soil! I deliberately let them grow on until late autumn when I dig up some of the roots, others left to grow on to the next year, and plant them in large pots ready to force later in the winter like witloof chicory. I usually force them by moving from storage in my cellar to a cool room in the house where I force them in the dark!
The other day I discovered a long suffering Hosta that I’d covered with a bucket in the spring. Surprisingly the blanched shoots were in good condition despite the warmth. We ate them as a salad with a simple dipping sauce (roasted sesame oil, soy sauce and pepper! And it was delicious, mild tasting, crispy and refreshing, the texture and shape of the leaf reminding my friend of artichoke! The day afterwards, I ate the rest lightly fried with garlic and chili in an omelette with sea kale broccolis! I’m sure you can use any Hosta for this. In Japan, Hosta montana is the main species cultivated for the markets. We found blanched Hosta shoots or urui in all the supermarkets in late march / early april during my study trip to Japan. However, H. montana is not an accepted species name by the Plant List (plantlist.org) and is often given as a variety, H. sieboldiana var montana or var gigantea. However, on the taxonomy account at http://www.hostalibrary.org/species/pdf/species_part1.pdf, it is stated that H. montana is so obviously different from H. sieboldiana that even the average gardener can tell them apart! For this reason, I used H. montana in my book as it is still commonly used in horticulture. For a list of cultivar names known as H. montana, see http://myhostas.be/db/hostas/montana. Hosta undulata is also noted on the Japanese Hosta wiki page as being used. This is no longer accepted as a species and is considered to be a group of cultivars H. “Undulata” (see http://myhostas.be/db/hostas/undulata for a list of cultivars associated with Undulata).

On the Japanese Hosta wiki (translated with Google translate), the main producing area for urui is given as  Yamagata prefecture (north of Tokyo on the other side of Honshu), which ship light green young shoots which are used for salads , pickles , stir-fry , with miso sauce , vinegar miso , miso soup , mixed rice , sushi rolls etc. This explains why we didn’t see the production of Hosta during our farm trips south of Tokyo.
The Japanese name is 雪うるい (yuki urui) which means snow leaf or icicles (google the Japanese name to see many pictures). They are produced in darkened greenhouses for an extended season or the rows are mounded outdoors. The production techniques seem to be different judging by the colour of the urui sold in supermarkets.

Last night (8th March 2017) was the first of two events I had been asked to take part in celebrating the diversity of vegetables that our area has on offer (or could have on offer) even in winter! The Trondheim Kosmorama international film festival are showing two films related to food. Last night, the film “NOMA: My perfect storm” was shown and around 40 people also bought tickets to a fantastic 10-15 course, 4 hour meal (I lost count) at Trondheim’s NOMA: Credo!
I supplied a number of vegetables for the dinner and these are shown here, several being served for the first time in Norway :)