(Translated  from this Norwegian article:  https://nbl.snl.no/Frederik_Sch%C3%BCbeler)

Frederik Christian “Fritz” Schübeler (1815-1892) was professor of botany and manager of the university’s botanical garden at Toyen in Christiania (Oslo) from 1866-92. Not without reason he has been called father of Norwegian horticultural and no doubt also the most important person for expanding the range of garden plants in Norway and also breeding of local varieties of economic plants!  Through great literary and practical efforts, he contributed greatly to domestic cultivation in Norway in the second half of the 19th century. I mentioned him in my book Around the World in 80 plants in connection with his work on trying to develop a caraway root vegetable (see also http://www.edimentals.com/blog/?page_id=1156) and is still inspiring us over 100 years since his death! 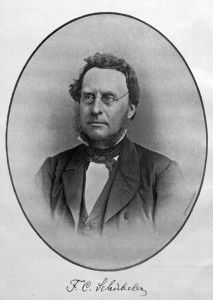 With a state scholarship and grant from Det Kongelige Selskab for Norges Vel, he travelled around Europe and studied botany and practical horticulture from 1848-1851. By 1852 he had become curator at the Botanical Museum and head of economic plant trials in the Botanical Garden at Tøyen. Behind the appointment, there was a bitter debate. The garden’s manager, Professor M.N. Blytt, claimed that the garden’s mission was not experiments with useful plants, but botanical research. When Schübeler applied for the post of head gardener in 1857, he was rejected. Only after Blytt’s death did Schübeler get a leading position. He was appointed a lecturer in botany in 1864 and professor and manager of the Botanical Garden in 1866. John M. Norman, who was Blytt most promising student and Schübeler strongest opponent, said in 1857 his position as a university fellow in protest against Schübeler attempts cultures.

Using a large network of trial hosts, enlisted amongst priests, wives of priests and others, he tried out a wide range of garden plants in all parts of Norway, in particular North Norway. At no expense to the state he established in this way research stations, where he annually sent seeds and plants from Toyen. The purpose was to determine climatic limits for new plants and promote seed breeding in Norway. One of his helpers, a pastor’s wife in Tysfjord, Louise Holm, wrote in her memoirs: “How many of us minister ‘s housewives and others, who have had a garden and cultivated it with interest, haven’t known Professor Schübeler’s name, either through his handy little gardening book or by working for him by transforming their small garden into an experimental station for him. ”

Schübeler’s  publications are many and range across a large field. Besides several books, he wrote a number of articles in newspapers, magazines and periodicals. Important contributions for ordinary people were “Havebog for Almuen” and Kjøkkenhavn (Kitchen Garden). Both came in three editions. The latter was also translated into Swedish, Icelandic, Finnish and Russian. His main work is however Culturpflanzen Norwegens, which came out in two revised and considerably more extensive editions, Die Pflanzenwelt Norwegens and Viridarium Norvegicum. Viridarium consists of three volumes totaling 1,876 pages and will stand as a permanent memorial over his efforts.  In this work, the northern border, height limit, flowering, seeding and cultural history of several thousand species are indicated! 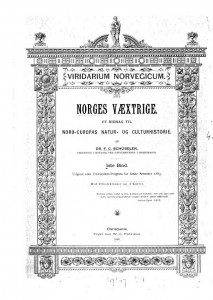 Schübeler started up and led Christiania Haveforening  (Christiania Garden Association) from 1863 to 1874, precursor to the Norsk gartnerforbund  (Norwegian Gardeners Association). At Toyen he had his own wheelbarrow, and it was not uncommon to meet the professor with a wheelbarrow in the botanical garden. 1884 he took the initiative to Selskabet Havedyrkningens Venner, a nationwide association which has since changed its name to Det norske hageselskap (The Norwegian Gardening Society). He was named an honorary member in 1885, and after his death they placed a memorial on his grave in 1901.

Frederik Schübeler made Norwegian nature widely known. As a scientist, he was fearless and original, but controversial, and many of his hypotheses are later disproved. It is not the theoretical contributions to botany he will be remembered for, but the pioneering efforts for garden use in Norway under the motto “Grow more valuable plants”.