Inspired by my multi-species salads, which were in turn inspired by multi-species traditional dishes from the Mediterranean countries,  Aiah Noack and team at  Grennessminde – Det Økologiske Gartneri (The Organic Nursery) just outside of Copenhagen, conceived what she called Fantasilater (Fantasy Salads).  They arranged the first competition between 3 Danish chefs in August 2014! I helped out as external consultant and on the day took part as the chief competition judge, and in that capacity overturned the verdict of the public vote!  :) The winner was Casper Sundin who, as part of his award, will receive an edible flower bed of up to 75 m2!

I had visited  Grennessminde in March when the 3 beds were still bare earth. Returning for the competition just 5 months later I was amazed at how good and productive these first year beds looked.  Aiah and Lisbeth had worked very hard to make the event a success and had made good sized signs with information about each plant and how they are used. There were in total 238 different plants of which 138 were perennials…. I feel my world record salad is coming under threat…. ;)

The chefs first followed me around the beds and I told them about the plants and how they are used.  They were then told to make a salad with at least 80 species collected by them from the Fantasilater beds and/or from a small selection of conventional veggies from Grennessminde’s traditional veggie beds including a few edible weeds. Dressing the salads was also allowed.  I and Aiah then gave short introductions to the concept of multi-species salads to the public and chefs. The chefs were given about 1 hour to make their salads. One trained helper was appointed to each chef to document what species they collected (and to give them  a bit of help). 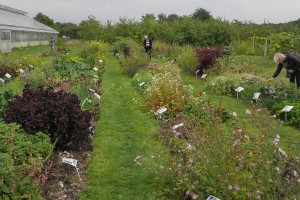