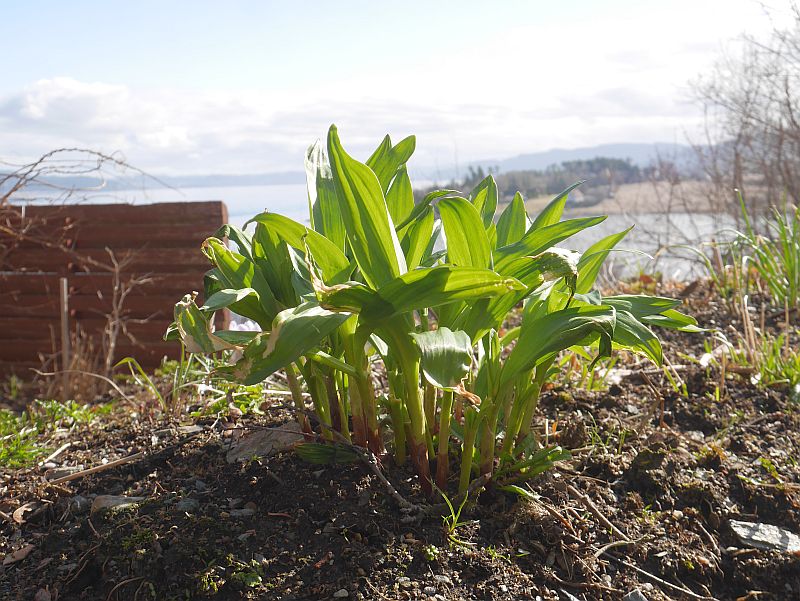 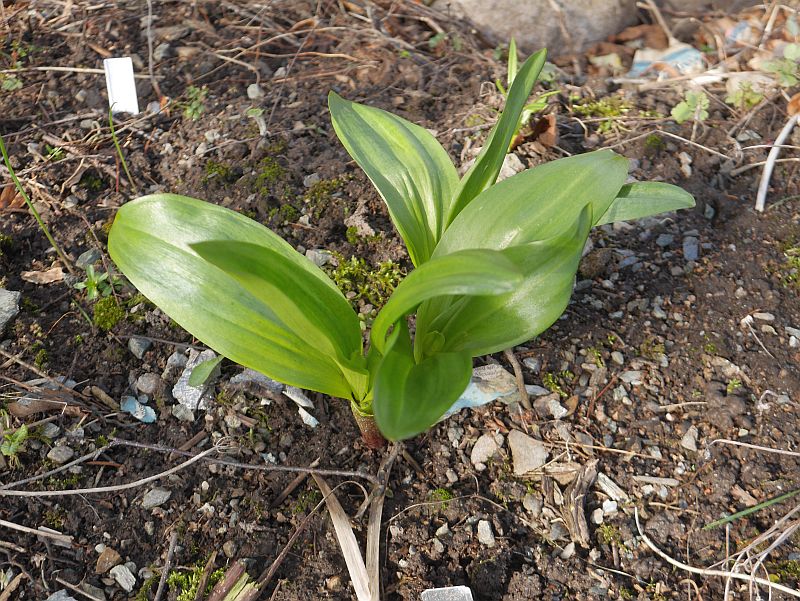 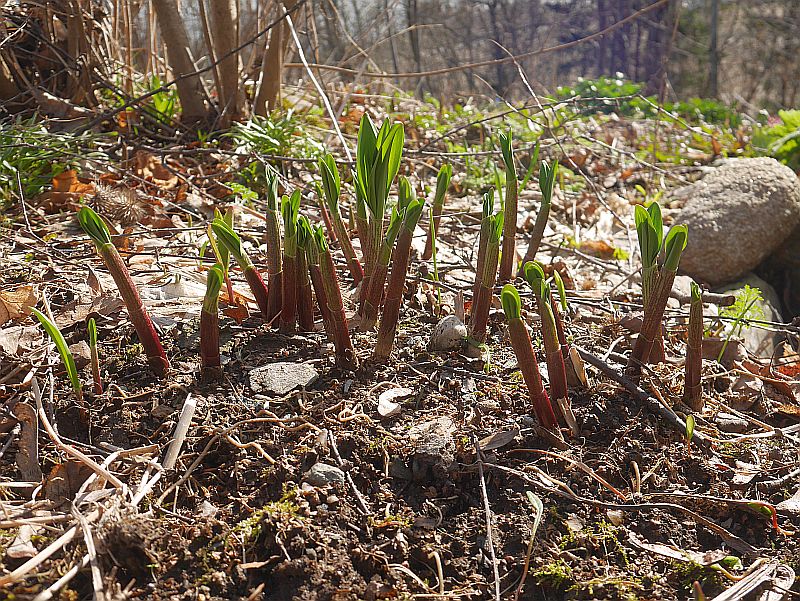 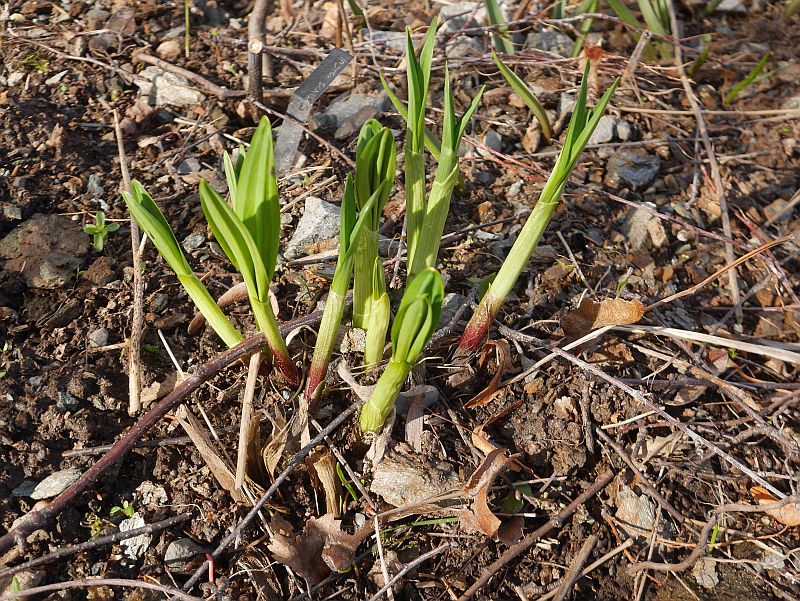 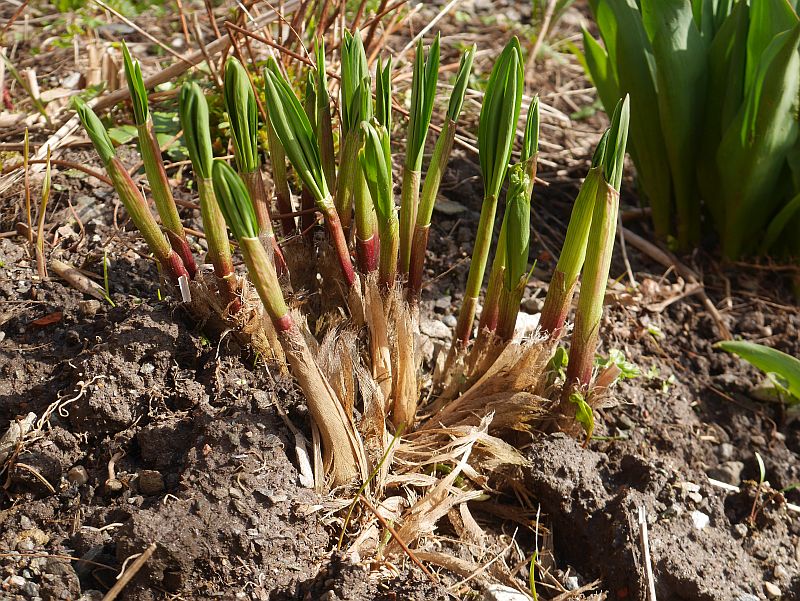 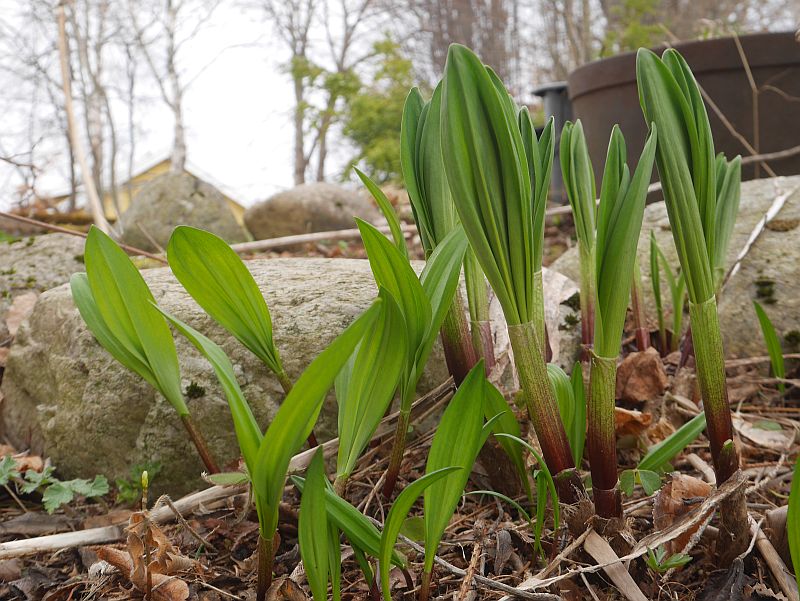 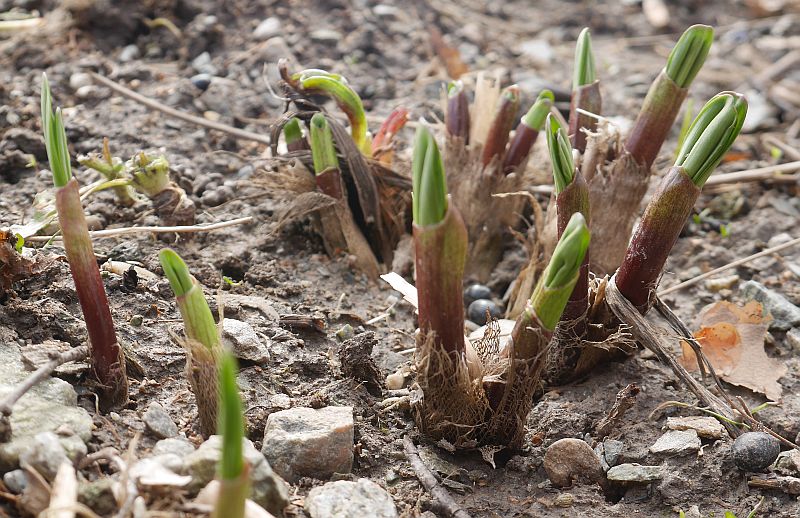 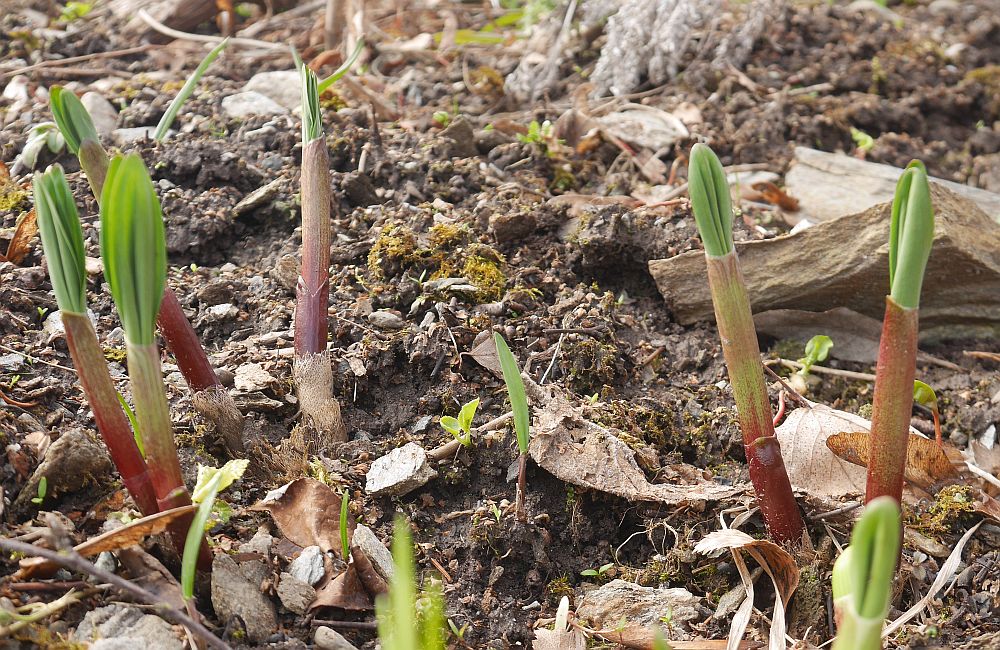 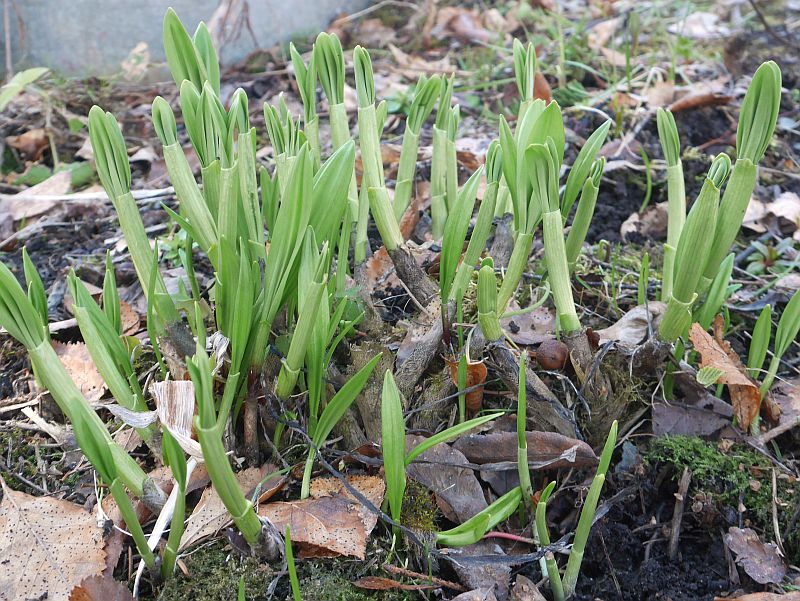 Last week, I blogged about a fantastic visit to a wasabi farm on the Izu peninsular in Japan during spring 2016, see

This was close to one of the world’s most amazing road bridges, the Kawazu-Nanadaru Loop Bridge,  a double spiral bridge finished 37 years ago in 1982, see https://www.dangerousroads.org/asia/japan/895-kawazu-nanadaru-loop-bridge-japan.html

Nearby was a shop selling a myriad of wasabi products! Let me know if you can translate any of the signs in the album! At the bottom are a few pictures from a popular nearby walk, the Kawazu Seven Falls.

We did a small hike along the Kawazu Seven Falls trail:

Platycodon grandiflorus (Balloon Flower), an important vegetable in the Far East, is just starting to flower in the garden. In Korea, it is called doraji. Its root, either dried or fresh, is used in salads and traditional cooked dishes. Young leaves are also used.
See also this video from a doraji farm in Korea: https://www.youtube.com/watch?v=F7OA9AsZAs0 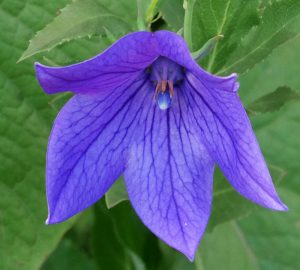 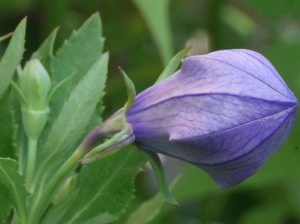 This is an asiatic hybrid lily growing in the garden of the flat I stayed in in Jondal during the Nordic Permaculture Festival!

According to wikipedia, asiatic hybrids include “hybrids of many Asiatic species and their interspecific hybrids, including  Lilium brownii,  Lilium henryi,  Lilium leucanthum, Lilium regale, Lilium rosthornii, Lilium sargentiae and Lilium sulphureum. The flowers are trumpet shaped, facing outward or somewhat downward, and tend to be strongly fragrant, often especially night-fragrant.”  Of these, both L. brownii and L. henryi are used for food.

On the other hand oriental hybrids “are based on hybrids within Lilium section Archelirion,specifically Lilium auratum and Lilium speciosum, together with crossbreeds from several species native to Japan, including Lilium nobilissimum, Lilium rubellum, Lilium alexandrae, and Lilium japonicum. They are fragrant, and the flowers tend to be outward facing. Plants tend to be tall, and the flowers may be quite large. The whole group are sometimes referred to as “stargazers” because many of them appear to look upwards”

I’ve never tasted hybrid lilies, but maybe I should as two of the asiatics and all the 6 oriental species involved are eaten in Japan…most importantly L. auratum which is cultivated for markets on a field scale, the others mainly foraged I think! I wonder if anyone has hybridised lilies for food rather than beauty….an interesting project for someone perhaps?

The other day I discovered a long suffering Hosta that I’d covered with a bucket in the spring. Surprisingly the blanched shoots were in good condition despite the warmth. We ate them as a salad with a simple dipping sauce (roasted sesame oil, soy sauce and pepper! And it was delicious, mild tasting, crispy and refreshing, the texture and shape of the leaf reminding my friend of artichoke! The day afterwards, I ate the rest lightly fried with garlic and chili in an omelette with sea kale broccolis! I’m sure you can use any Hosta for this. In Japan, Hosta montana is the main species cultivated for the markets. We found blanched Hosta shoots or urui in all the supermarkets in late march / early april during my study trip to Japan. However, H. montana is not an accepted species name by the Plant List (plantlist.org) and is often given as a variety, H. sieboldiana var montana or var gigantea. However, on the taxonomy account at http://www.hostalibrary.org/species/pdf/species_part1.pdf, it is stated that H. montana is so obviously different from H. sieboldiana that even the average gardener can tell them apart! For this reason, I used H. montana in my book as it is still commonly used in horticulture. For a list of cultivar names known as H. montana, see http://myhostas.be/db/hostas/montana. Hosta undulata is also noted on the Japanese Hosta wiki page as being used. This is no longer accepted as a species and is considered to be a group of cultivars H. “Undulata” (see http://myhostas.be/db/hostas/undulata for a list of cultivars associated with Undulata).

On the Japanese Hosta wiki (translated with Google translate), the main producing area for urui is given as  Yamagata prefecture (north of Tokyo on the other side of Honshu), which ship light green young shoots which are used for salads , pickles , stir-fry , with miso sauce , vinegar miso , miso soup , mixed rice , sushi rolls etc. This explains why we didn’t see the production of Hosta during our farm trips south of Tokyo.
The Japanese name is 雪うるい (yuki urui) which means snow leaf or icicles (google the Japanese name to see many pictures). They are produced in darkened greenhouses for an extended season or the rows are mounded outdoors. The production techniques seem to be different judging by the colour of the urui sold in supermarkets. 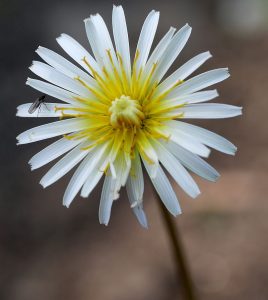 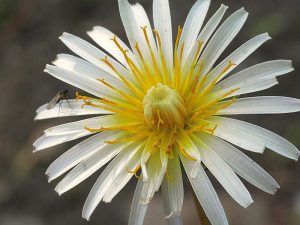 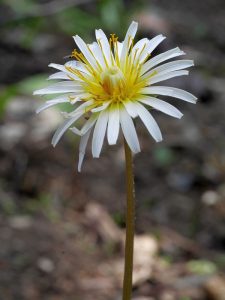 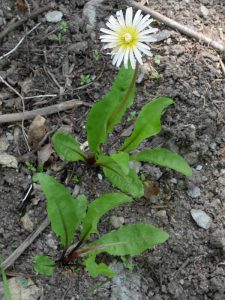 One of my favourite multi-purpose vegetables and one of my first unusual vegetables  that I grew in my garden in the 80s was burdock or borre, more specifically various Japanese cultivars of Arctium lappa, hardly used in Europe and North America apart from a few foragers, even though it’s a common wild plant and hardy.  Although it is best known as a root vegetable, there are varieties bred for their leaf petioles and the flower stems are really delicious! If you add to this that the seeds are foraged by various birds like goldfinches and greenfinches in winter in addition to being impressive photogenic plants which tolerated shady conditions, no permaculture garden should be without them!
In the album below are pictures I’ve taken over the years, in my garden, in botanical gardens and in the wild. There follows links to various blog posts about burdock! 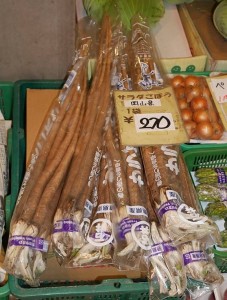 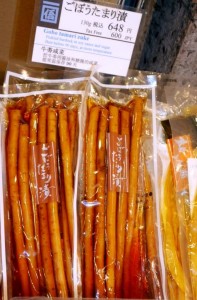 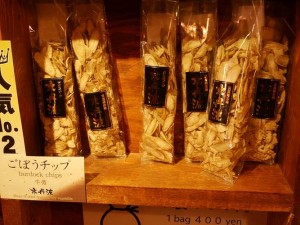