In late 2012, I read an article in the RHS Garden magazine entitled “Growing the taste of home” reporting on the results of the New Seeds Project. The project had been started by Anton Rosenfeld and Sally Cunningham from the charity Garden Organic who had realised that immigrants to the UK had brought their favourite vegetables with them and had over the years selected new varieties better suited to the cooler conditions prevailing in the UK. These new varieties of often exotic crops were in danger as many of the first wave immigrants were elderly and the knowledge wasn’t being passed on. The project received funding and  in the course of the project over 250 types of vegetable were found in allotments in the Midlands, far exceeding their expectations. The article highlights Walsall Road Allotments in Birmingham as a vegetable diversity hotspot reflecting the cultural diversity of this site where allotment holders originated  from 14 countries (including Kenya, Iraq, Bangladesh and Mauritius).  Varieties were trialled at Garden Organic’s Ryton Gardens with the aim to safeguard the genetic resources through the Heritage Seed Library scheme.

In the article, 4 allotment owners at Walsall Road were interviewed. This included Teresinha Roberts from Brazil, an expert on natural plant dying, who apart from dye plants was growing wapato ( Sagittaria latifolia), an aquatic root crop from North and South America, in addition to  achocha (Cyclanthera pedata) and  black-eyed beans (Vigna unguiculata subsp. unguiculata) from a Caribbean neighbour. 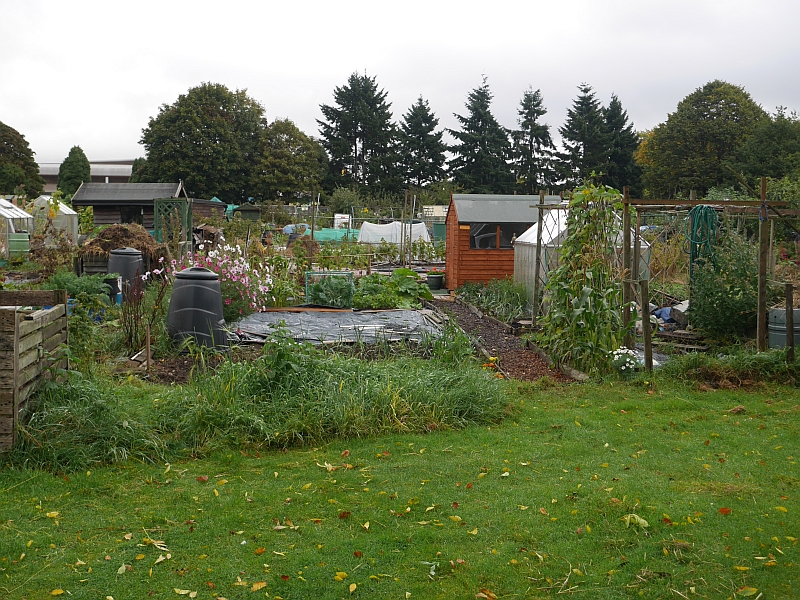 At the time I had started to try to document what was being grown and foraged by migrant communities in Norway and I made a mental note to try to visit Walsall Road the next time the opportunity arose. I mentioned this at the time to a net friend who was living in Birmingham and had an allotment there herself.  She frequented a Norwegian garden forum where she is known as Island Monkey! That opportunity didn’t happen until October 2015 when I was invited to give a talk at Croome Court a little to the south of Birmingham. Securing a flight back from Birmingham, I was able to spend most of Monday 5th October in Birmingham and Island Monkey kindly arranged visits to Walsall Road and the biggest allotment site in the UK (if not also Europe) at Uplands (see a separate blog about this to come!)

The whole RHS article can be read here:  https://www.rhs.org.uk/about-the-rhs/pdfs/publications/the-garden/2012/September-2012/preserving-the-taste-of-home

It was a bit late in the season,  but our host Betty (the secretary of the allotments) guided us around explaining which nationalities cultivated which plots and we are able to see a good range of seasonal ethnic vegetables including callaloo, methi (Indian fenugreek greens), artichokes and chicories (Italian), cuccuzi, an Italian heirloom edible gourd, lablab beans,  the aforementioned Teresinha Roberts’ dye garden and, to my surprise 2 or 3 types of perennial kales, one on the plot of  guy from Kenya, where perennial kales are still cultivated commercially!

My album of pictures can be seen here: http://www.edimentals.com/pictures/index.php?/category/73

Many thanks to Betty and Island Monkey for your help!!

One thought on “Walsall Road Allotments in Birmingham”