Vagn J. Brøndegaard was a Danish ethnobotanist who died at 95 last year. He is best known for his major 3 volume publication on Danish ethnobotany, Folk og flora (People and flora) which was first published between 1978 and 1980 and, later, a new edition in 1987 (1,753 pages on 500 Danish wild and cultivated species and 28,000 references!!). I remember discovering this impressive work in the library in Trondheim some years ago and consulted it several times when writing my book Around the world in 80 plants. What prompted this post was a heavy parcel that I collected at the post office recently.  It contained a brand new 2 volume 1,108 page tome “Etnobotanik. Planter i skik og brug, i historien og folkmedicinen. Vagn J Brøndegaards biografi, bibliografi og artikler i udvalg på dansk (2015)” meaning «”Ethnobotany. Plants in customs, history and folk medicine. Vagn J Brøndegaard’s biography, bibliography and selected articles in Danish’ (editor: Håkan Tunon)
(it can be downloaded free of charge here: http://tinyurl.com/pv4u6lg) 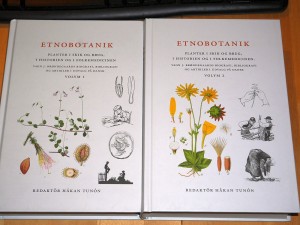 The Norwegian Genetic Resource Centre (NIBIO) had received some free copies of this work to give to libraries, institutions and researchers. I was one of the lucky ones for whom Xmas came early! ;-) I am writing this in English as I think that Brøndegaard’s works, including this new one are only available in Danish, Swedish and German and deserves to be much better known outside of Scandinavia). I knew little of Brøndegaard’s life and work before receiving this book and I’ve only really skimmed the surface of it so far, but briefly Brøndegaard was born in 1919 into a farmer’s family in the small community Fanefjord on the island of Møn in Denmark, famous for its impressive nature and particularly its chalk cliffs (which I visited in 2014): 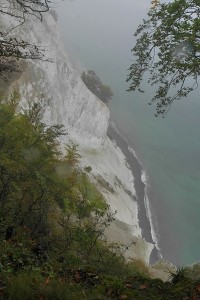 Brøndegaard’s achievements were carried out solely as a private person outside of academia. He read incessantly but didn’t have “green fingers”. According to his daughter, pot plants he cultivated would just die! Over the years, he wrote an astounding number of articles on popular scientific topics and, for almost 50 years, published hundreds of articles in scientific and popular journals and anthologies focusing on ethnobotany, economic botany, cultural and historical aspects of plants!

Brøndegaard’s writings gave a clear picture of the breadth of human use of Danish biodiversity through history and will I’m sure in retrospect will be seen as one of the most important researchers in Danish history. However, Brøndegaard doesn’t seem to have received the credit he deserved in Denmark and his ethnobotanical collection was acquired by the Royal Swedish Academy of Agriculture and Forestry (KSLA), including over 70 shelf meters of books and other writings, all indexed in a special catalogue with nearly 2,400 subject headings. This collection possibly has no equivalent in the world!

See also Brøndegaard on the rubber dandelion, burdock and useful weeds here ( a translation to English from an article in the new book)
http://www.edimentals.com/blog/?page_id=2880

Folk og flora can now be downloaded from KSLA’s library web site on the Brøndegaard collections, alongside much more (see http://www.ksla.se/anh/bibl/brondegaardsamlingen)!! I am in awe of this man and his achievements and look forward to having time to read more of his work. I am fortunate that I can read Danish and Swedish without too much difficulty!