When I was in the Strandja Nature Park in Bulgaria last month, I was introduced to a new for me woodland edimental groundcover bee-friendly plant, Trachystemon orientalis. It clearly has potential as a Forest Garden plant, where it is hardy, although it could potentially be invasive. It is missed in major works on edible plants such as Plants for a Future and Cornucopia II! In the UK, it is recognized as particularly valuable as a ground cover as it tolerates very dry conditions in summer! 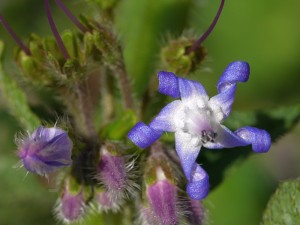 Here’s a few pictures of it taken in woodland in the Strandja Nature Park in April 2015. Before I had known of it’s edibility I had also taken one picture of it just last December at Hilliers Aboretum in Hampshire, UK. As fate would have it, I’m giving a talk there tomorrow!! http://www.edimentals.com/pictures/index.php?/category/31

Wikipedia says: Abraham-Isaac-Jacob , Early-flowering or Oriental Borage, is a perennial herb of the family Boraginaceae. It is frequently grown as an ornamental for its early blue-violet flowers and large leaves. It quickly spreads to provide a dense groundcover. Trachystemon is derived from the Greek trachys, meaning rough, and stemon, a stamen. The species name orientalis means eastern or from the orient, and is a reference to the native distribution of this species. Trachystemon orientalis is endemic to southeastern Europe and western Asia.

I am grateful to one of my new friends from Bulgaria, Maria Tariyska and also Ivan Kamburov  for informing me and for explaining how it’s used in Bulgaria:

An article from internet – http://www.plantspeople.com/oriental-borage-trachystemon-orientalis

“Farmers bringing cultivated crops and wild harvests to the Black Sea farmer’s market in Kasimpaşa Istanbul provide a glimpse of north Anatolian landscapes. In March many market stalls had large heaps and sacks of Oriental Borage (Trachystemon orientalis) for sale by the kg. It is a native Turkish plant that grows in deciduous forests, on shady riverbanks and damp ravines. On the edge of the Black sea in north Anatolia high rainfall throughout the year creates a damp climate, very much a contrast to the Aegean and Mediterranean coasts that have scorching hot and dry summers, and to the concrete dominated landscapes of cities. Oriental borage is used as a vegetable and is also considered to have medicinal properties in Turkey.  Outside of its natural distribution from east Bulgaria to west Caucasus, that includes Turkey, Oriental borage can occasionally be seen grown as an ornamental garden plant.  As an early blooming and nectar yielding plant it is good for bees.  It also grows vigorously – perhaps best demonstrated by its abundance on markets – and tolerance of shade makes it a good groundcover plant. In Germany Turkish immigrants cultivate Oriental borage as a crop since it is not a native species in Germany and it is not available on the market. However it has the potential to become naturalised in Germany as it persists in ruderal places if it is not collected and used. This introduction of Oriental borage as a crop species in Germany is relatively recent, it is a neo-hemerophyte. Other members of the Boraginaceae family are known to contain pyrrolizide alkaloids, which may also be present in Oriental borage. Consequently there may be health concerns over consuming this plant in large quantities.”

3 thoughts on “Trachystemon orientalis, a new Edimental for the dry forest garden”