This is the third in a series of articles about plants that I associate with Korean woman Misoni Sandvik in Oslo!

She contacted me originally as she was keen to grow a plant that she remembered from her childhood in Korea, Aster scaber (see http://www.edimentals.com/blog/?page_id=3103). She helped me buy a Korean perennial vegetable, Ligularia fischeri  (see http://www.edimentals.com/blog/?page_id=3114). She also taught me about a number of unusual edibles that other ethnic groups in Oslo were using and in particular one, Bunias orientalis, known as Turkish rocket in English, a plant probably introduced to Europe from Western Russia in the Napoleonic wars. In Norwegian, it’s known as Russekål, literally Russian cabbage. This plant has invaded south east Norway and is a common site on Oslo’s streets. Misoni informed me that the Thai community in Oslo picked large amounts of this plant in the spring for special fests. This spring, Pål Karlsen, editor of the Norwegian Useful Plants Society, and Jon Strand Martinsen met two of the Thai women, Gintana Otterlei and Tian Muangchan, accompanied by Misoni, on the right in this picture, shown in front of a large stand of harvest-ready Turkish rocket! 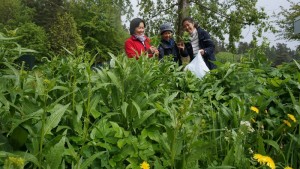 This summer the magazine published two (Norwegian) articles on Turkish Rocket, the first written by me, adapted from the article in my book and then an article from a foraging tour with the Thai ladies. Below is the a pdf containing the two original articles and below that an English translation on the foraging tour article!

“On a Turkish rocket foraging trip with the experts”

Russekål, you ask. Really, you can eat it? “Yes, some actually love it! Just pick the top part”, exclaims Gintana decisively. “The largest leaves do not taste so good.”

It is late May and Turkish rocket (russekål in Norwegian) or Bunias orientalis is ready for harvesting. The flower buds are as large as broccoli, but there are still no visible flowers. We are on a foraging walk with experts from the Thai community in Oslo.  Gintana and her friend Tian eagerly start harvesting from the stand of Turkish rocket at their normal foraging spot somewhere in south-east  Oslo. They are both from Thailand, where there are several well-known and beloved food crops from which strongly resemble “Russian cabbage”, which is the reason why they are so keen on this plant. Dok pak kwang tung directly translates as “cabbage with the yellow flower” explains Gintana. “It’s not exactly the same species that we have in Thailand, but it resembles it very much. When we see it here in Norway, we think immediately of “kwang tung”, she says with enthusiasm. “We see it right away”.  Her friend nods as she begins to fill a new bag.

I stand with my hands full of large and small Turkish rocket leaves and have to admit that Gintana is right. The largest leaves taste just a little too bitter and over-seasoned. The smaller leaves, and especially the flower buds, taste much better, much like broccoli with a little pepper. I am also keen now, and after fifteen minutes we have filled four shopping bags with goodies!

The flower buds are to my amazement just like broccoli, both in taste and appearance. The stems have a slightly “rustic” finish. The smell is something special, and it is difficult to describe it without using the plant’s name.  Turkish rocket tops are prepared by pulling away the lower leaves,in the same way as when one puts roses in water. The stalk is prepated just like asparagus. If it is young and fresh, to don’t need to do anything, is it older and coarser, you can peel off the outer layer with your nail from the top and down.

The plants grow close together, and dominate the area they have colonized. Russekål, as the name suggests, originates from Russia and Asia, but was found in Kongsberg (Norway) already in 1802. Since then, it has spread in eastern and to some extent also in western Norway and along the coast north to Nordland county.

Some hikers passing by ask what we are doing, and we explain that we are foraging in the middle of the hiking area, explaining that the plant in question is both a good food plant and also blacklisted (unwanted invasive species), so that we can pick with a clear conscience. Most people categorise this plant as a weed. The hikers accept, and disappear sceptically further along the trail each with a bouquet  of Turkish rocket!

We have now filled all our shopping bags with rocket, and it is clear that our activities attract attention. Actually, besides Tian and Gintana I can’t  think of a single person who promotes and actively uses Turkish rocket as food. For the time being, it looks like its use is limited to the Thai community in Oslo.

I’ve now have eaten many leaves and flower buds of this wonderful plant, but, in the kitchen its preparation surely involves more than the raw product? Yes, certainly! They explain to me that when they get home after a successful foraging tour, there are three ways of preparing them.

The first – and easiest – is via a wok, where the most common is using only russekål. The plant’s distinct taste is then preserved even with oyster sauce, soy sauce and chili. The second method is to use it as a vegetable in other dishes, either with chicken or pork, but the girls explain that most often it is part of a pure vegetable dish. “We have even used it in vegetable soup”, they explain.  “Then we cook a base to the soup with spring onions and russekål. It can also be added at the end of cooking in order to maintain its crispness. ”  The third method is perhaps the preferred one. The broccolis are  blanched for a few minutes with 10-15 cm of the stalk.  This is then a new product that can be used for different purposes (most of the sharp taste of the raw plant disappears, but the distinct rocket taste is still there) – and then roll it up and and dip it in a sauce involving minced shrimp, also known as “nam prig “. They ignore my frightened expression, and stress that this is considered as very good and exclusive food in the Thai community!

A common theme in harvesting of plants is also the possibility of storing, and I also ask about this. “After blanching we find that it works best to have it in ice water and then freeze it”, they explain seriously. After a few months in the freezer, the product loses some of its quality. “It happens often that I end up with a freezer full of russekål. I have tried to freeze it for a whole year, but the result was not exactly uplifting”, said Tian.

But today,  frozen ingredients are far away from Gintana and Tian’s minds. With full bags, they start on their journey home with some hours of work ahead in cleaning the “catch”.

Oil for frying if necessary.

Cut the stems into 1-2 centimeters long sections, and stir-fry in oil for 3-5 mins with oyster sauce, garlic and chili. Soy sauce can also be used if one wants a more salty taste.
Turkish Rocket with shrimp paste dip

The rocket is first blanched whole in water for 2 minutes. The chili is cut into small pieces and added together with the crushed garlic in the fish sauce. Lemon juice and sugar are added and stirred until the sugar is dissolved. Shrimp paste is added in the quantity required.

Thanks to Pål Karlsen for the pictures included in this article.
See my book Around the World in 80 plants for more about this plant! 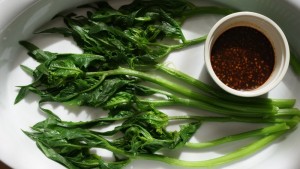 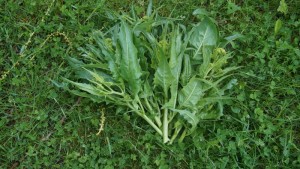 5 thoughts on “Turkish rocket in Oslo: a Thai speciality vegetable!”