In Denmark’s major ethnobotanical work, Brøndegaard’s Folk og Flora (1978-80), ground elder (skvalderkål; Aegopodium podograria) is one of seven different greens used in a once common health-bringing springtime dish, skærtorsdagssuppen (skærtorsdag=Maundy Thursday) and I included this in my book as a number of perennials were among the ingredients as they are at their best around Easter when this dish was served: 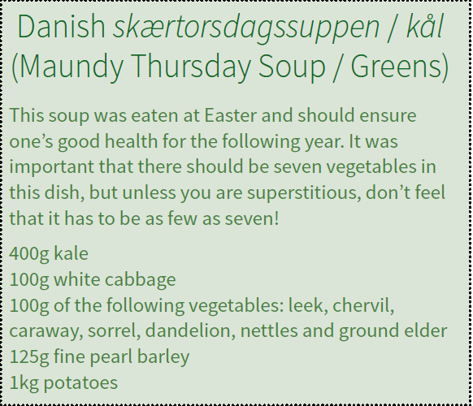 The number 7 is considered lucky in different cultures around the world and is often seen as highly symbolic. This Danish dish is related to the northern England dish Dock Pudding, which has very similar ingredients (see Easter Ledge Pudding in my book Around the World in 80 plants).

After my book was published I came across another seven vegetable dish from Japan, nanakusa, which contains an unusual mix of edible plants (see the first slide below – from my talks over recent years) including perennial Oenanthe javanica (seri) and as fate would have it, on my study tour to Japan, organised by my friend Aiah Noack, I was taken to a farm where they were actually producing several of these herbs (pictures below). Greenhouses full of common chickweed (Stellaria media; vassarve) was a sight I won’t forget easily! Today, 7th January, is the Festival of Seven Herbs or Nanakusa no sekku (Japanese: 七草の節句) and is the old Japanese custom of eating seven-herb rice porridge on this day. 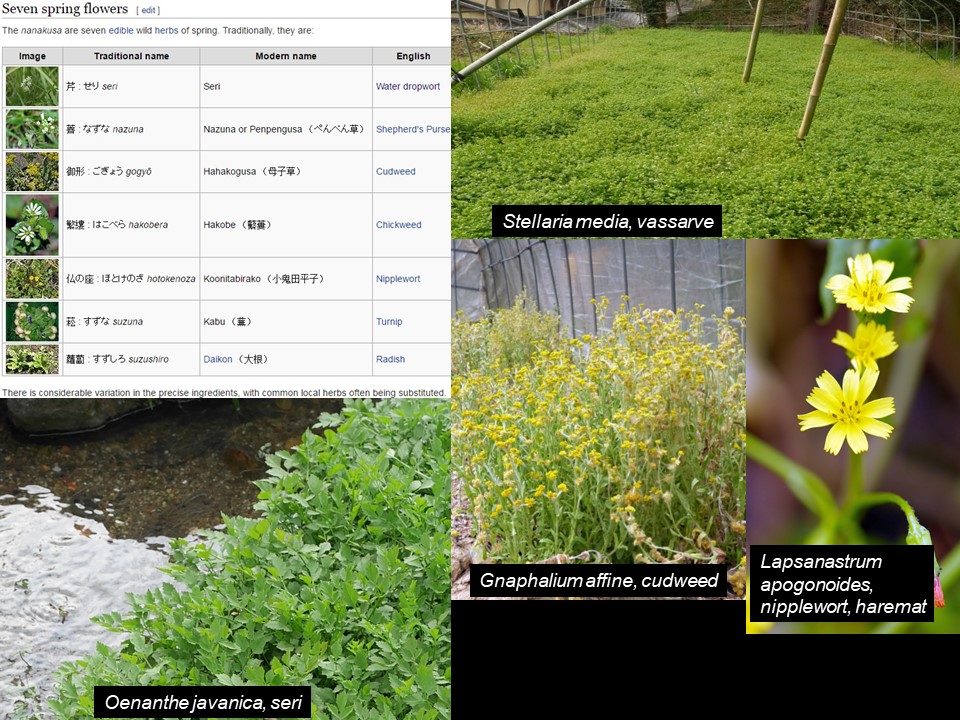 As I was writing this I wondered if there were other seven herb traditions  out there and, right enough, a quick google search revealed two others (please let me know if you know of others):
Seven vegetables on the seventh day of the Chinese New Year is eaten for luck and health, a tradition perserved by the Teochew or Chaoshan people in Southern China. The following five vegetables must be included, the other two are flexible: celery, garlic, green onions, coriander and leeks.
Seven vegetable couscous: Seven is a lucky number in Jewish tradition and a dish featuring seven vegetables is a New Year favourite among Sephardic Jews (early autumn). A recipe can be seen here: https://theveganatlas.com/seven-vegetable-couscous