A few unusual vegetables this October from the Edible Garden and House:
1. I’ve been trialling around 20 different chicories this year from seed from the German seed bank IPK Gatersleben. This is one of the best producers, Sugar Loaf (Accession CICH 350) which ended up in yesterday’s Basella and Chicory pizza! I remember years ago on a work meeting in Venice enjoying a chicory pizza. 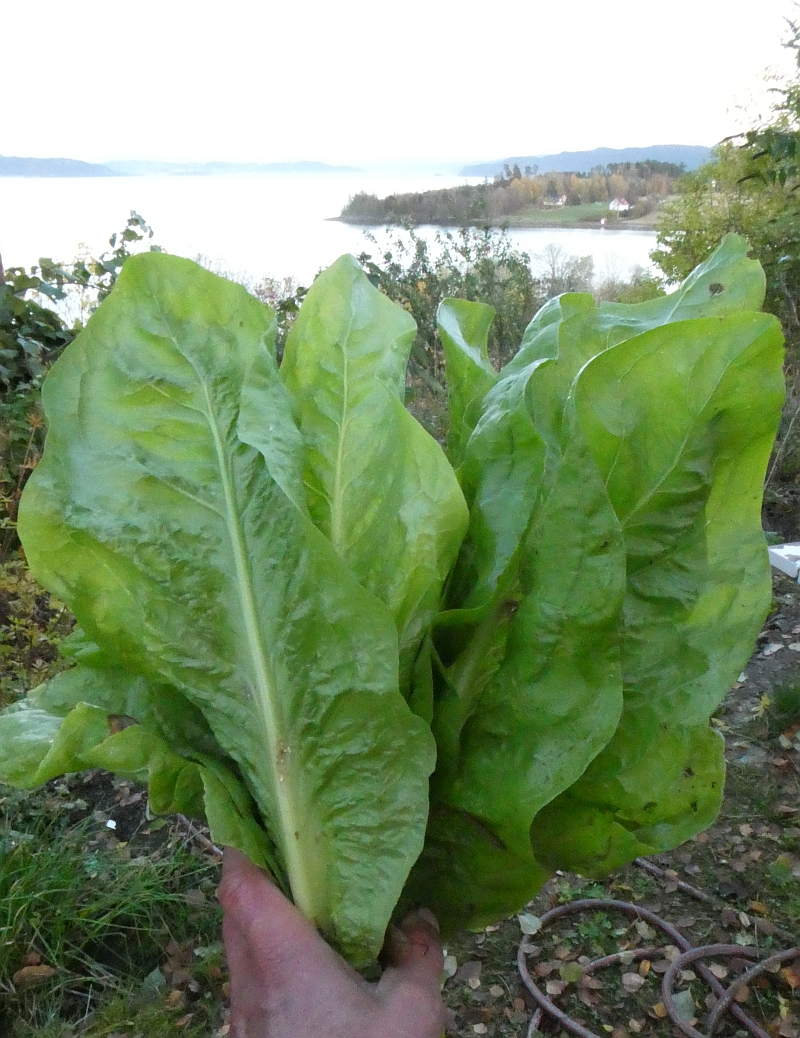 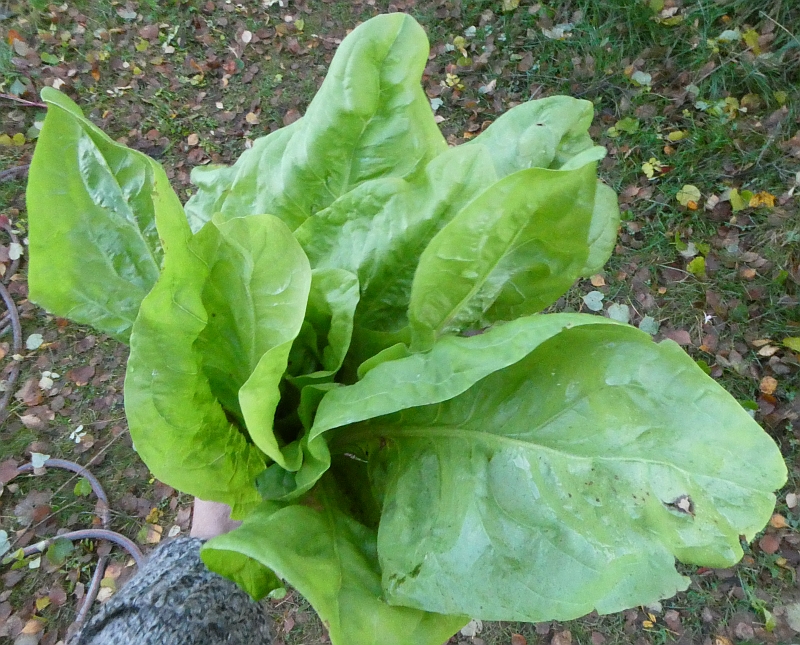 2. Gunnera tinctoria is the representative for South America in my book Around the World in 80 plants. Sadly, it is not very hardy and mine grows in a large pot half submerged in my small pond and is moved into the cellar for the winter where it goes to sleep for most of the winter. The edible leaf petioles don’t reach the size of plants grown outside and are therefore a bit more fibrous. Their crunchy texture and sweet-sour taste was nevertheless a good addition to a mixed salad earlier in the week. 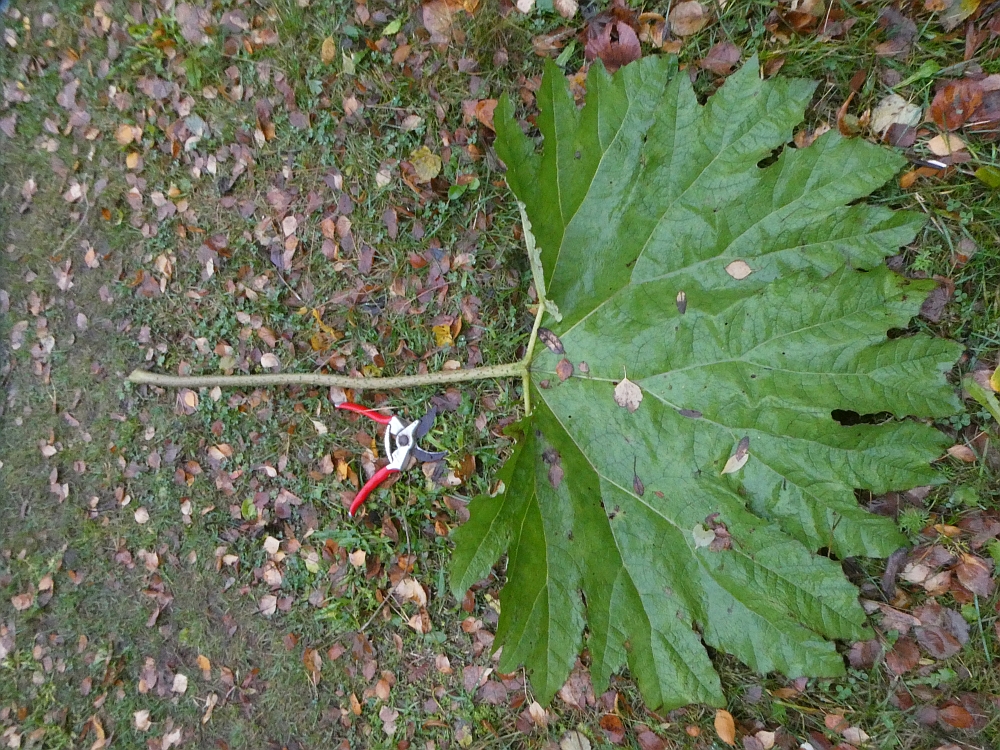 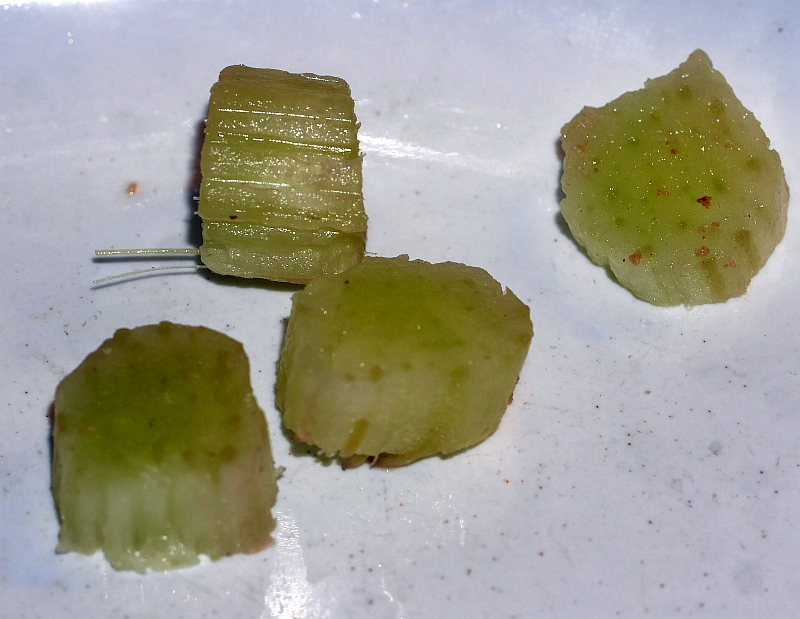 3. This summer was the first time I’d grown Okinawan spinach (Gynura bicolor). I cut it down earlier this week and used the leaves in the mixed salad together with the Gunnera. It’s the variety with red undersides to the leaves. Thanks to my friend Kim Jacobsen who leads KVANNs Stueplantelaug (Norwegian Seed Savers’ (Edible) House Plant guild) for sending me cuttings. It looks and tastes good! 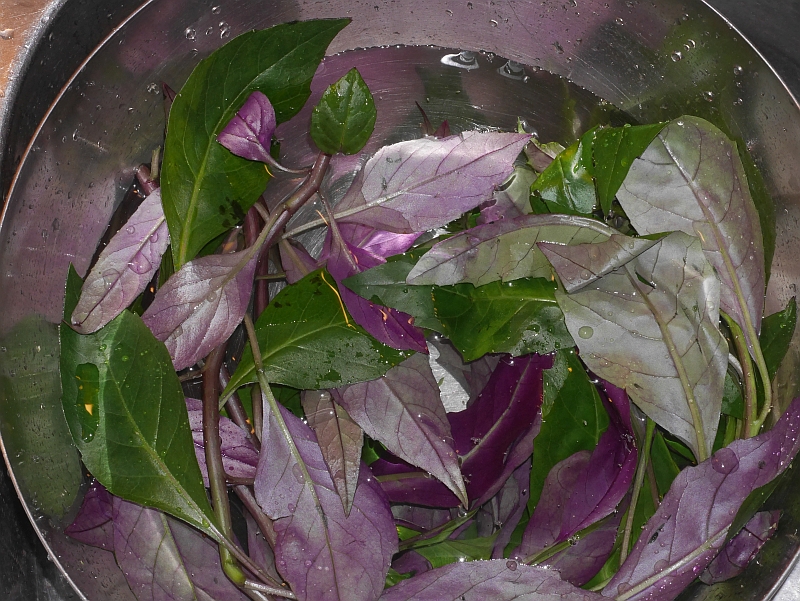 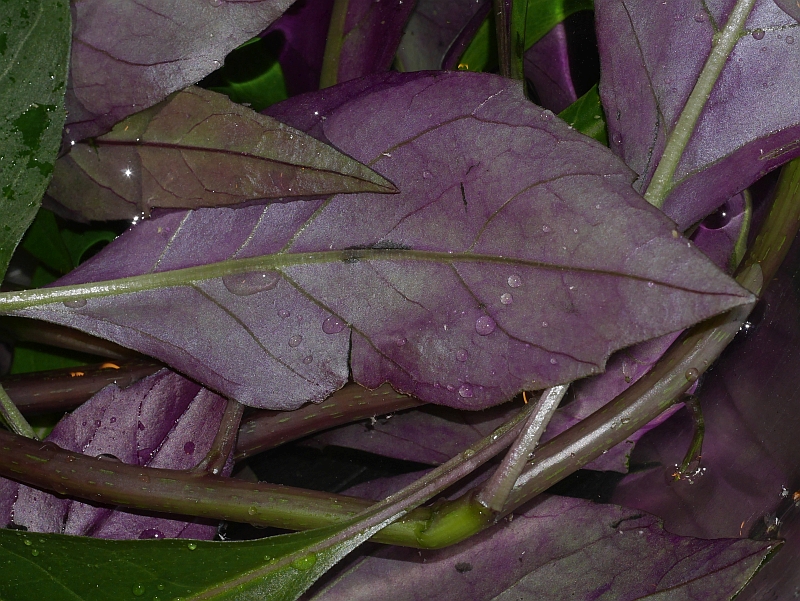 4. I also grow Basella (Ceylon spinach) inside and it always produces berries and seeds for the following year and for sharing. This was used with the chicory (above) in the pizza. 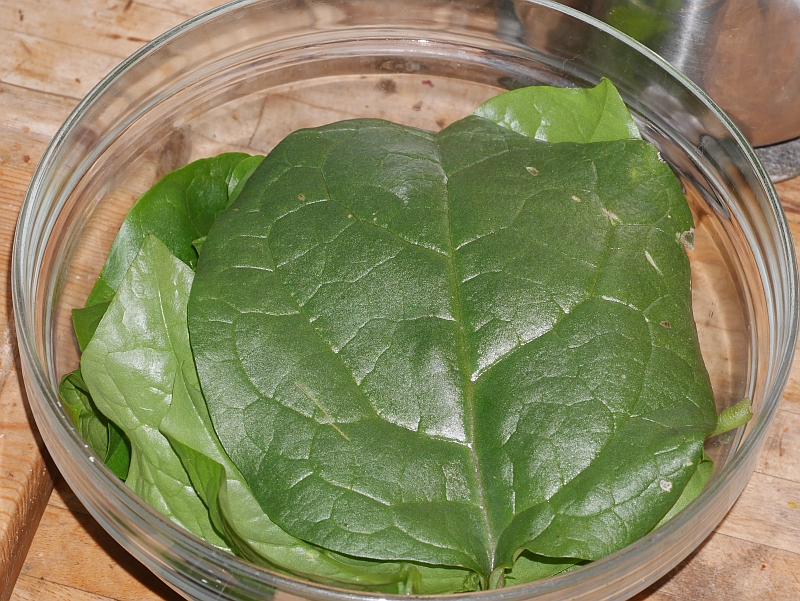 6. One of my favourite wild edibles is common sow thistle / haredylle (Sonchus oleraceus), although I deliberately cultivate it. However, apart from posts by myself, this is a plant that isn’t mentioned in Norwegian foraging groups in Norway. Is this because it needs some preparation in order that it’s merits can be properly understood, the bitterness maybe putting people off at first taste? This is a plant I devote several pages to in my book Around the World in 80 Plants and I document how this is an important wild edible worldwide. My introduction to its merits was in the book Native Edible Plants of New Zealand by Andrew Crowe and on a work trip to that country in the early 2000s I could see for myself how important this plant is for the Maori people with over 1/3 of all the vegetable stalls selling this plant. Known as puha to the Maori, it has become a so-called cryptocrop* of the Maori vegetable gardens, an annual “weed” introduced by the Europeans with a similar taste to the traditional perennial endemic sea-cliff inhabiting puha (Sonchus kirkii). Annual puha is encouraged in between the main crops as it has a cash value and increases the yield of the land. It has also been suggested that the large consumption of annual puha by the Maori (hardly used by people of European descent) protects them against some forms of cancer. I was so inspired by the story of how a plant much hated worldwide could at the same time be a superfood appreciated by the Maori and all the other peoples around the world who are in the know, that I introduced it to my garden and it is now become my most important vegetable from late July to the first frosts! From it becoming a burden to weed out this coloniser of open soil, I now weed this “weed” leaving only a few plants to grow strong on the edges of my vegetable beds….and hate is turned to love! Much more in my book!
*Crytocrops: a distinction has been made between cryptocrops
from weeds by Diego Rivera et al. in a 2006 paper: “This led us to distinguish cryptocrops from weeds. Both are not cultivated plants living in crop fields and competing with the main crop. The fundamental distinction is the intensity of gathering by man”. 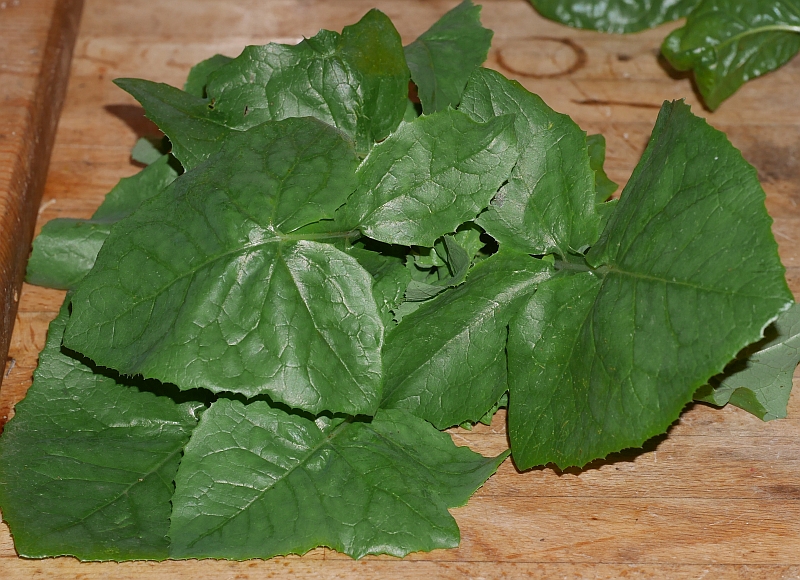 7.  I have a special fascination for vegetables that are superstars in one part of the world but hardly known in their area of origin and one of those is garland chrysanthemum or crown daisy (Glebionis coronaria, early known as Chrysanthemum coronarium). This is a wild and extremely common flower of early spring in Mediterranean countries, often growing in large quantities, and commonly available in supermarkets in Japan where it’s known as shungiku. See more on this blog post Shungiku soba (a standard offering in soba restaurants in Japan): https://www.edimentals.com/blog/?p=22710
There is a legend that Marco Polo introduced pasta to Italy from China. In an article “Fra Malta til Japan og tilbake” (From Malta to Japan and back again) that I wrote 15 years ago for a Norwegian herbal magazine Grobladet in 2006, I suggested that Mr. Polo gave chopsuey greens in return (see and download the article here https://www.edimentals.com/blog/?page_id=3493).
When I first wrote about shungiku in 2006, I could only find one reference of its use in the Mediterranean for food. Since then, there have been carried out numerous ethnobotanical studies throughout the Mediterranean and a quick search carried out now revealed that this plant has been used traditionally throughout the area, although by no means a common wild edible:
In Turkey: numerous studies (leaves, young shoots and stems are used) have recorded this plant used as summarized in a paper from 2019 by İsmail Şenkardeş and others: “An Ethnobotanical Analysis on Wild Edible Plants of the Turkish Asteraceae Taxa”
In addition, it is recorded in two studies in Spain, in Morocco, Palestine and in Sicily it was both cooked and used in salads.
This plant fits nicely into my diversity cooking as it produces new shoots in smaller amounts throughout the summer from July to the first frosts and they are usable even after the plant has flowered and produced seed.
There are many cultivars with different flower colour, double and single and serrated and whole-leaved forms. I’ve grown some 10-15 different cultivars this summer, the seed from the collections at IPK Gatersleben in Germany. 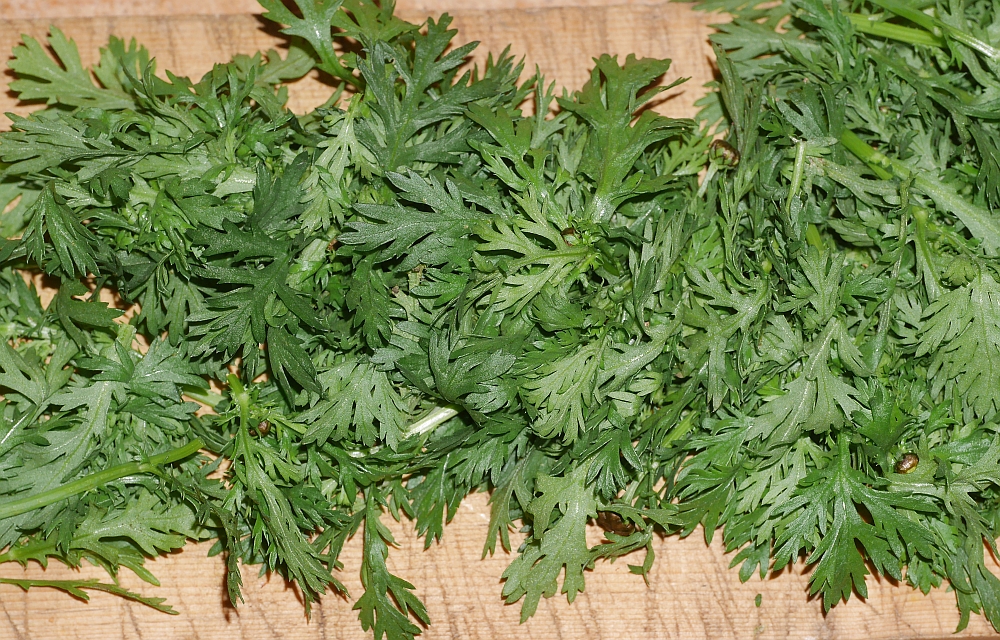 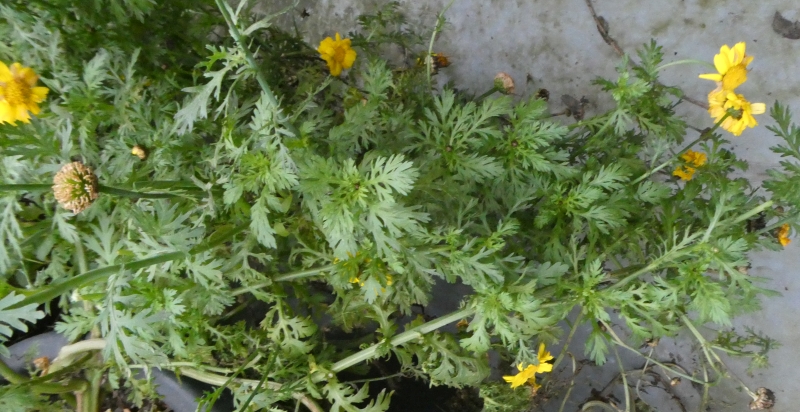 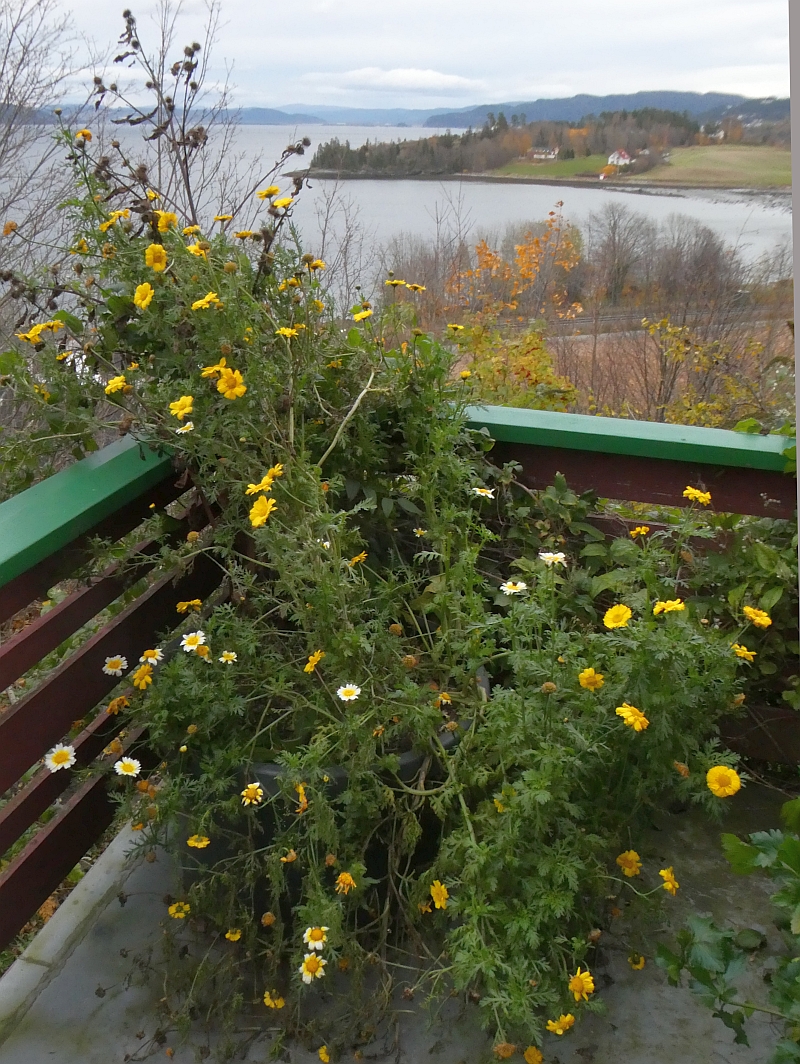 Here’s how I sow and record perennials sowed mid-winter for stratifying. They will be left outside until they germinate in April-June, some not until 2020!