Bullfinches (dompap) take a very wide range of seeds in my garden including hawthorn, rowan, nettle and Norway spruce, as well as buds of different trees, but this was the first time I’d seen them taking guelder rose (Viburnum opulus) seed and I could see them discarding the flesh of the berries. Even when they have a rich supply of sunflower seeds, they will continue also to take natural food.

A small flock of Waxwings (sidensvans) finally arrived at the end of November and have been foraging in the garden since (rowans / rogn failed this year). In these videos, they are eating apples, elderberry and guelder rose berries (epler, svarthyll and krossved). I’ve heard tawny owl (kattugle) calling in the garden regularly recently too and the last video is a recording of one calling.

I garden for the birds and other wildlife as well as myself and believe that bought bird food (sunflower seeds) is not necessarily a good thing as it’s imported and largely grown inorganically to the detrement of birds and other wildlife in the country of origin. My observations are that most bird species in our area prefer natural food (including grain in local fields) and several species never or seldom come to bird feeders. Others such as blackcap (munk) are reliant to a large extent on garden berries and fruit.
For these reasons, I put out purchased birdfood including homegrown grain and apples only when the whether is severe. Even here in the north where we have largely had subzero temperatures day and night since November, most birds seem to be finding plentiful natural food this winter. Today, greenfinches (grønnfink) and bramblings (bjørkefink) were feeding on rowan (rogn) berries, I noticed a blue tit (blåmeis) eating nettle seed, waxwings (sidensvans) were taking guelder rose (krossved), hawthorn (hagtorn) and rowan berries (films below), a blackcap was spotted eating one of the last apples still hanging on a tree, fieldfares (gråtrost) were eating hawthorn berries and, for only the second time I noticed goldfinches feeding on chicory (sikkori) seed before switching back to burdock (borre) seed. I grow both burdock and chicory for food and a bi-product of seed saving is that the birds get a share. There are also flocks of siskins (grønnsisik), crossbills (korsnebber) and pine grosbeaks (konglebit) feeding on spruce and pine seed, often in large flocks. Every evening there are maybe a thousand crows (hooded crows / kråke and jackdaws / kaie) that fly into the roost at Vikhammer, still finding grain during our short day in the snow-covered fields. There’s also a local flock of over 90 Canada Geese (Kanadagås) that are overwintering and still able to forage in the fields. There are thousands of wildfowl also on the fjord and I today noted a flock of 250 mallard (stokkand) duck resting in the bay below the house.
Bird feeders can also have negative impact on birds as disease can spread rapidly, such as salmonellosis in greenfinch and house sparrow.
Growing plants in our gardens to supply a greater proportion of winter food for our birds is something many of us can do, but it does mean leaving seed heads to deadhead until spring and encouraging wild plants such as nettles which have multiple uses for us and wildlife. It’s also not as easy as buying a bag of bird seed from the supermarket. Bird friendly plants can be planted in good view of the house. For example, I have a yew tree right next to my kitchen window which allows me to observe berry-eating species such as blackcap, waxwing, robin, fieldfare, redwing and blackbird to within 1m!
I think we should also consider delaying putting out commercial bird food until weather really is severe.

1. Waxwings in slow motion – notice what happens with the rowan berry in the second sequence in the first video:

2. Only the second time I’ve seen goldfinches on chicory:

Eurasian redwings (rødvingetrost) seem to becoming more common in winter here. I now have 7 records of single birds since 2015 (December to March) and today there were 4 together feeding briefly with fieldfares (gråtrost) on guelder rose (krossved) berries! Interestingly, 27th December seems to be the best day to see redwings here as I now have records in 2015, 2017 and 2021 on this day! 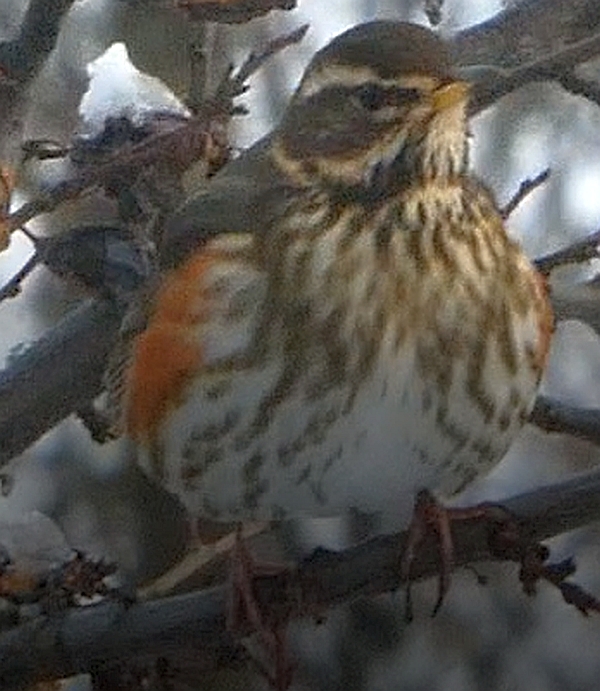 Part of the biggest flock of waxwings (sidensvans) in the garden today, around 350 birds!….seriously distracted all day by these photogenic arctic “parrots”! Feeding on yew (barlind), hawthorn (hagtorn), elderberries (svarthyll) and guelder rose (krossved) berries…

2.  Waxwings on the yew tree by the kitchen window

3. Waxwings on yew berries in the neighbour’s garden

5. In this film you can hear waxwing poop falling to the ground…I thought it was raining!