I have a large bucket on the balcony where i grow greater burdock (Arctium lappa) for the birds, Both goldfinches (stillits) and greenfinches (grønnfink) eat burdock seed in winter and by growing the plants on the balcony I have close views of both species from where I’m typing this! Last year, the plants flowered and set seeds, they germinated en masse this spring, I thinned them and this was the harvest today. The largest roots and the smallest ones will be replanted in the spring. The others will be eaten in oriental stir-fries this winter. 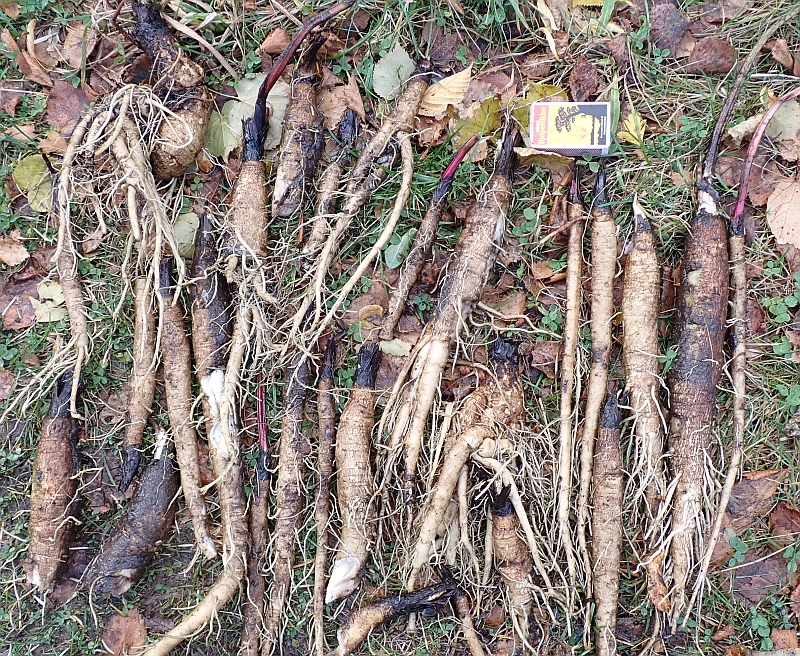 With heavy wet snow overnight weighing down all the plants in the garden together with plummeting air temperature, a flock of goldfinches (stillits) (collectively known as a Charm) were at the bird feeder this morning. I guess it’s more difficult for goldfinches to get at their preferred food, burdock seed (Arctium spp.) in these conditions.
With bramblings (bjørkefink), greenfinch (grønnfink) and yellowhammers (gulspurv). 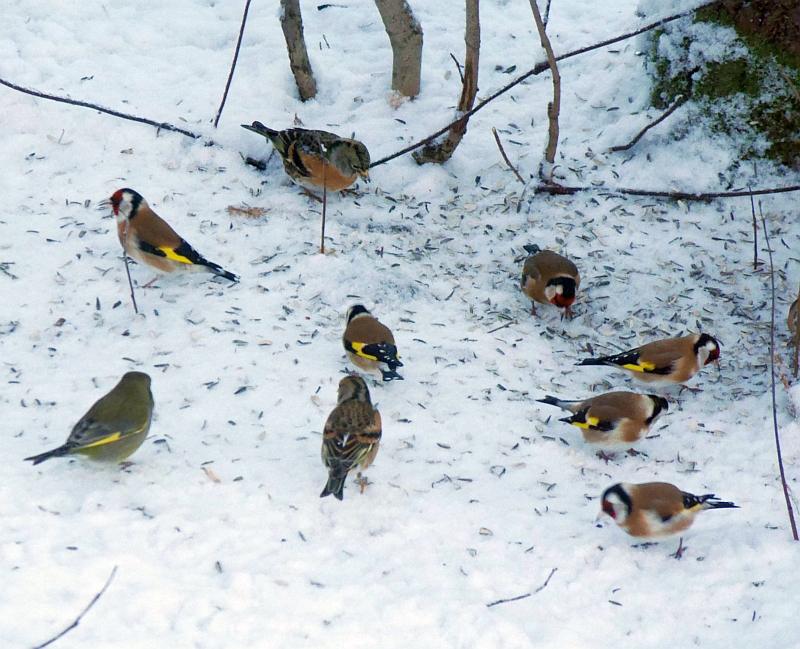 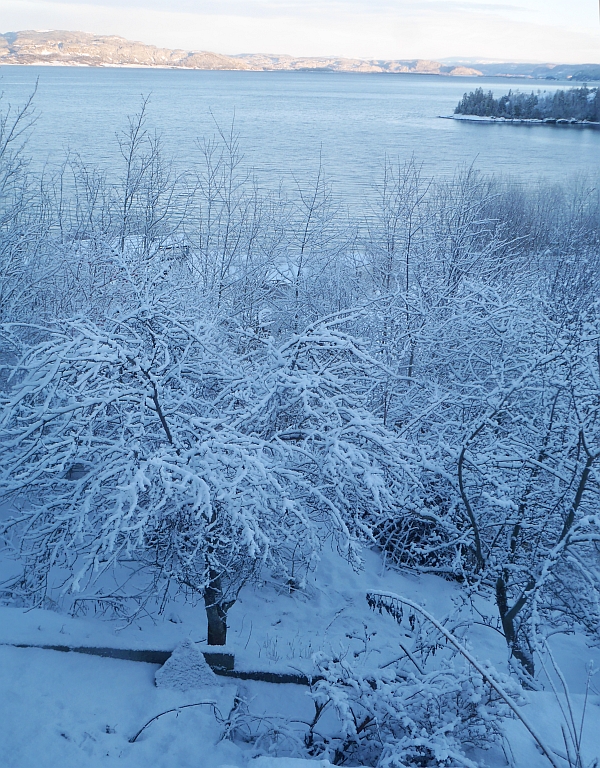 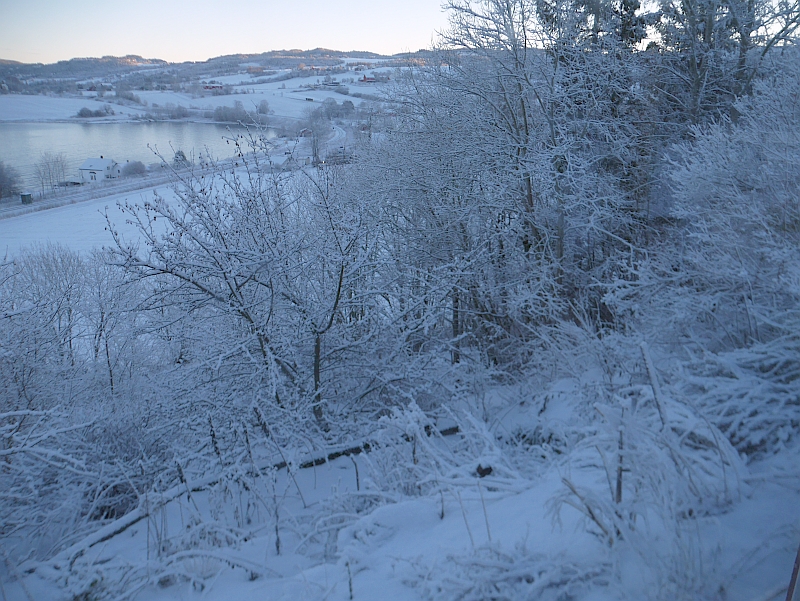 I’ve written a series of articles in 3 parts “Fuglevennlige planter i hagen” (Bird friendly plants in the garden) for the magazine of our national bird society (NOF, now Birdlife Norge) called Vår Fuglefauna (Our Bird Fauna). The first part (6 pages) has already been published (the first two pages are shown below; deliberately blurred text (below).
My most successful plant (genus) supplying bird food in winter has been various species of burdock / borre (Arctium spp.). The oil rich seeds are very popular with goldfinches (stillits) and greenfinches (grønnfink). This autumn I cut a few plants growing in a different part of the garden and moved them in full view of my kitchen window which allowed me to film a flock of 11 goldfinches yesterday (see below). In the summer, the same plants are popular with various pollinators and for that reason also provide food for other insectivorous birds in summer. 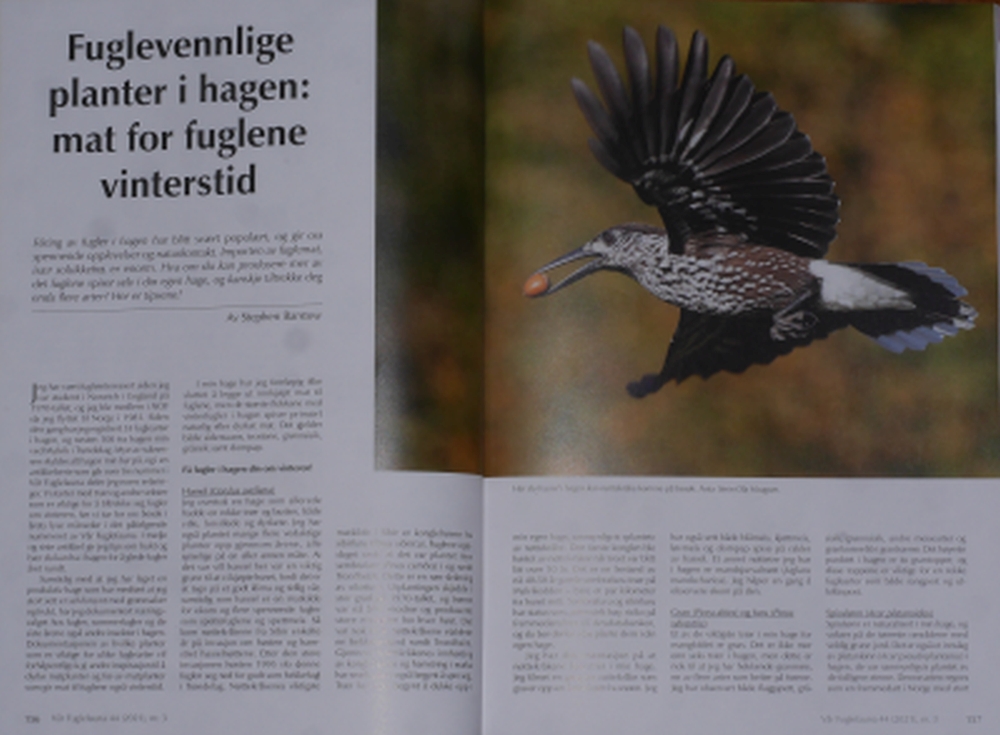 The article will also be published for members of Norwegian Seed Savers’ guild for “Insect and Bird Friendly Plants” in a few months from now. This guild works focuses on plants that are beneficial for maintaining a garden rich in a diversity of insects and birds, whilst still providing food for us! 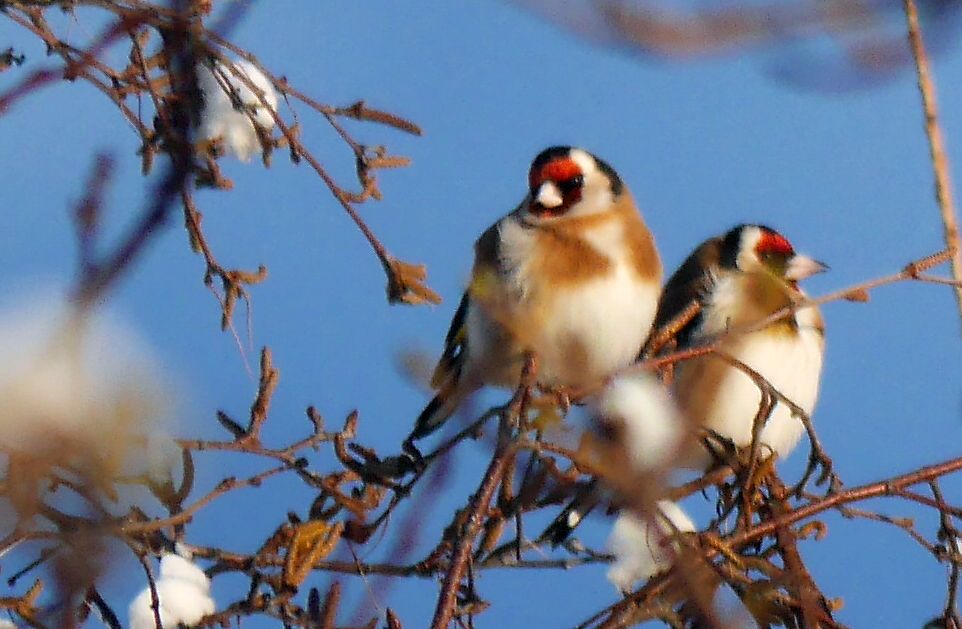 I’ve grown burdock on the balcony this year, the favourite wild winter food of goldfinches (stillits) and greenfinches (grønnfink). I can then watch them feeding from my desk :)
They’ve been absent for some time apart from a single bird occasionally. A flock of 6 birds were in the garden most of yesterday:

3) …with a nuthatch doing neck exercises (taken from a film) 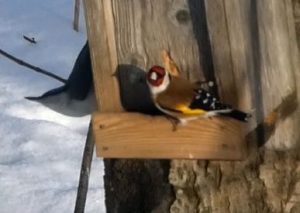 Greenfinches (grønnfink) enjoying the sunshine in the garden with a few yellowhamers (gulspurv) amongst the aspen (osp) buds!

With 40-50cm of snow in the farm fields, grain-eating birds are desperate for food. Today, some 30 yellowhammers (gulspurv) and many hooded crows (kråke) and jackdaws (kaie) were at the bird feeder where I’d put out some grain this morning!
Greenfinches feasting on goatsbeard (geitskjegg) (Tragopogon pratensis) seeds this morning!