At last, after the warm summer the porcinis (ceps / steinsopp; Boletus edulis) are coming up in large numbers in the woods, the best year since 2005! I’d read the reports on Facebook, so now is the time to harvest and dry these amazing fungi in as large amounts as possible to last until the next time, hopefully not another 16 years! Almost all were in good condition. They are often infected with a parasitic fungi that makes them inedible! In addition, we found a large patch of yellow foot / gul trompetsopp or gul trompetkantarell (Craterellus lutescens), at a place I’d picked many some years ago. Not a fungi I find every year. There were also some chantarelles (kantarell) and a few puffballs (røyksopp). The walk home with a very heavy load was thankfully mostly downhill! Now for the biggest job of cleaning them before drying!

My daughter asked if we’d like to come and join her and her friend in Napolitana (the village pizza restaurant). We were actually just about to eat pizza with new zealand spinach (NZ spinat), broad beans (bondebønner), Johannes shallots (Sankthans-sjalott), patience dock (hagesyre), sea kale (strandkål) and steinsopp (cep / porcini) topping with Hartington Silver thyme (timian) in the tomato sauce with chili….on a sourdough pizza made with 100% wholegrain barley (bygg), svedjerug (Svedje rye), spelt and emmer wheat.
We ate at home!
More work 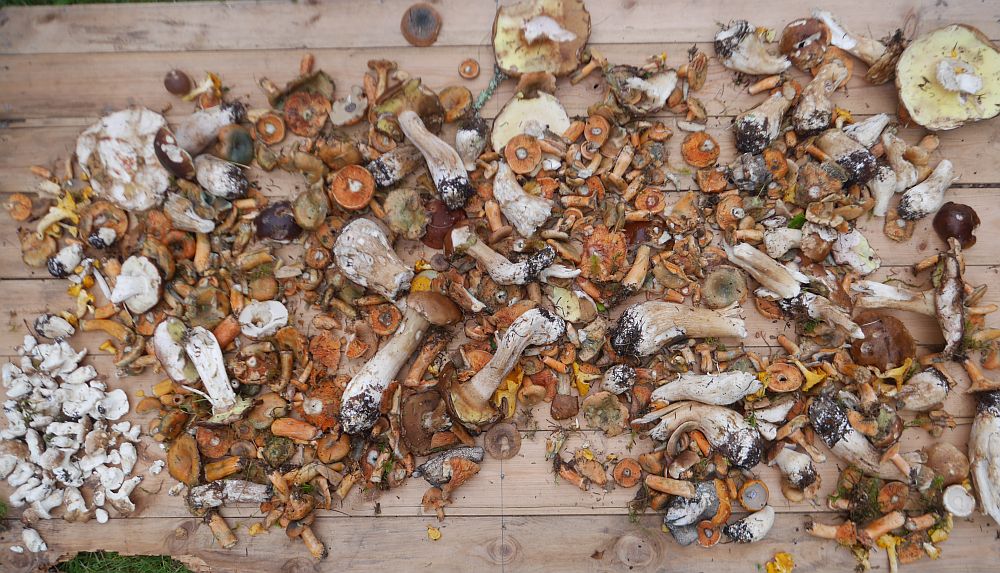 I can’t remember the last time we had a porcini (cep, penny bun) or steinsopp in Norwegian year here, well over 10 years I think!! There are huge amounts for the pickings…and they were all in good condition with almost no insect larvae nor the parasitic fungi (snyltesopp) which makes them inedible.
There were also large amounts of saffron milk caps (matriske) again unusually for the time of year completely free of insect larvae!
Perhaps the warm dry weather was good for the fungi but not the flies!
I had to stop as I was afraid the load would be too much for the bike brakes on the very steep descent home!
Strangely, the most common edible fungi (chantarelle and hedgehog fungus/ kantarell og piggsopp) were almost totally absent!

Now, the job to dry them and return to the woods a couple more times to dry enough for the next porcini year!