Another album from my visit to Iceland in September 2015.  Just a short drive from Skálholt (http://www.edimentals.com/blog/?page_id=2727), we arrived at one of the best known experimental farms in Iceland. Before we arrived, my guide Auður Ingibjörg Ottesen told me that the guy we were to visit was an old hippy and good friend and we would get on just fine!

Ingolfur Gudnason  and  Sigrún Elfa Reynisdóttir farm at Engi which is in Laugarás in Biskupstungur, just down the road from our last stop at Skálholt and about 100 km from Reykjavík. Engi is farmed organically. Seasonal fruits and vegetables are grown there in addition to herbs in warm and cold greenhouses all year round. (Engi has a nice web site here with location map:  http://www.engi.is/# ). There is also an outdoors herb garden an aMAZing maze  http://www.engi.is/#/velundargardurinn/4552215689 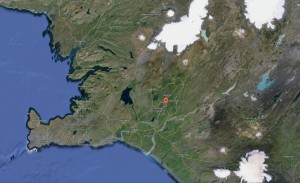 Engi was previously moorland (the house is right next to moorland still) and Ingólfur and Sigrún reclaimed the land themselves. I soon realized that I had met Ingólfur before, first at the Plants that tell stories seminar in Hillerød, Denmark in November 2008 where I’m pretty sure he told me about the only location of Allium oleraceum in Iceland (see the story of how this plant probably arrived in Iceland from near where I live in my book!). We also met at the  Nordic Potato Meeting in Ås in October 2012.

Ingólfur and Sigrún are real innovators in Iceland, testing many new and exotic varieties. In 2010, Ingólfur and Sigrún were awarded the Horticultural Society of Iceland Incentive Award. Ingólfur is particularly knowledgeable about the use of herbs and plants and the gardening history of Iceland. He oversaw the establishment of the herb garden in Skálholt (which we had just visited) in 2004. He has held many courses on cultivation and gardening history and is on the committee of the Nordic Gene Bank, representing Icelandic commercial plants:

The last few pictures in the album are from the home of Auður Ingibjörg Ottesen and Páll Jökull Pétursson, my hosts who produce the Icelandic gardening magazine Sumarhúsið og garðurinn. Auður organised my trip and all the excursions during my visit! THANK YOU!! Páll Jökull Pétursson is also a well known Icelandic nature photographer (check out his aurora pictures and other albums here:  https://uk.pinterest.com/palljokull/aurora-borealis-in-iceland) and author (for example, http://www.amazon.com/Portrait-Iceland-Pall-Jokull-Petursson/dp/9935920127)