When I saw this picture of the Moss-leaved dandelion in Vilmorin’s Vegetable Garden from 1920, I knew I had to search it out. I just hoped it was still of this world and hadn’t succumbed to civilisation’s persecution of the dandelion over most of the last hundred years. I therefore made this slide that I presented on my talks: 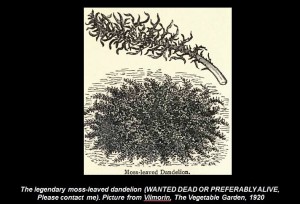 Then, on a talk for the Danish Seed Savers in Denmark early in 2012, my friend Søren Holt raises his hand and tells me that he knows someone who grows it!!! I was astonished as I had more or less given up hope of finding one alive :) The rest of the talk was a blur as my mind was on only one thing….
The grower was Guy Dirix in Belgium and he was kind enough to send me both a root and some seeds which arrived on 18th April 2012. The seeds didn’t germinate but the root survived. My life was complete ;)
Guy told me that he had got this dandelion from the Gatersleben gene bank in Germany under the name Taraxacum sublaciniosum “Delikatess”. The botanical epithet sublaciniosum refers to the jagged leaves, and the cultivar name meaning delicately jagged…
I ordered seed of this plant from Gatersleben, but there must have been a mix up somewhere as the resultant plant had far from jagged leaves. The plant from the original root is still the only one I have.
Here are a few pictures of it taken on 14th May 2015. The spring leaves are more jagged than later in the year.  My Canadian friend Telsing Andrews was openly equally excited by this Dandelion and her friend Patricia Wallinger had a T-shirt made for her birthday and she was so kind as to send me one too….you may have seen it before in this album:
http://www.edimentals.com/blog/?page_id=1043 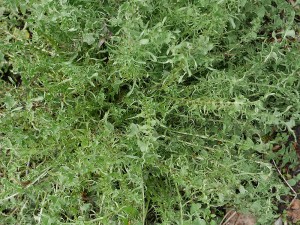 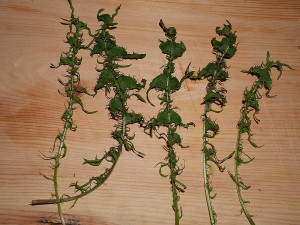 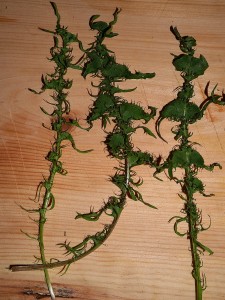 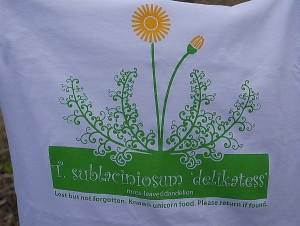 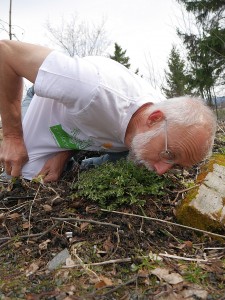 4 thoughts on “The legendary moss-leaved dandelion”