Great to be able to present my work at the Hillier Gardens, very close to where I grew up. A place that I’ve visited many times over the years!
I first had a tour of the gardens with the Head Gardener Fran Clifton (herself a keen veggie gardener) to collect salad ingredients for the lunchtime salad. I think we collected some 30 different plants.  I’ve never been able to forage in a botanical garden before, so this was fun :)

This was followed by the Around the World talk, my first in the UK and, as usual, it went over time! In the meantime the kitchen staff, ably lead by Terry Lewis, had prepared  a vegetarian asparagus cannelloni with Rosary goats cheese (local ingredients) accompanied by salad!

After lunch we adjourned to the gardens for a tour looking for interesting edibles! I didn’t take many pictures as I was talking too much!

The day at Hilliers was made even more special by two amazing coincidences. First, I was giving a talk in Western Norway in mid-May and another Englishman, David Woodland, was there. It turns out that David grew up only a few miles from me in Colden Common ( I was in Eastleigh) and not only that,  his dad was Dennis Woodland who did most of the work and took pictures for the Hilliers Manual back in the 70s. David later lived with his family in a flat in Jermyn’s House where the lecture was!! An older staff member fondly remembers Dennis, who merits a mention in the Hilliers book “The People, The Plants, The Passion” which commemorates the family’s 150 years in business! David also moved to Norway in the 1980s and is a very keen vegetable grower!

In my book I introduce the Hampshire towns of Alresford, Selborne and Alton as the “Hampshire perennial vegetable triangle” or the UK hotspot of perennial vegetable domestication. Alton is included as the home of botanist William Curtis, who was Praefectus Horti at the Chelsea Physic Garden in London in the 1770s. He wrote a pamphlet, ‘Directions for the culture of the Crambe maritima or Sea Kale, for the use of the Table’ in 1799 to bolster efforts in introducing it as a market vegetable.  Who should turn up to my first UK lecture than a volunteer, Sheila John, from the Curtis Museum in Alton, unknowing that I had mentioned Curtis in my book, her eyes certainly opening wide on my mention of the triangle in my talk! Sheila wrote:  “We were especially interested to hear about the ‘Hampshire Triangle’ and as I mentioned, I volunteer at Alton’s Curtis Museum.  The William Curtis after whom the museum is named was a distant cousin of the botanist and lived a generation later than him.  (There was a whole Curtis dynasty in Alton right up to 1957 and most of them seem to have been called William!)  But we still hold William the botanist in high esteem, the house he grew up in in the centre of Alton is still there and in the Allen Gallery, the Curtis Museum’s sister organisation, we sell cards of his botanical illustrations and even have panels of them sewn onto the cushions in the gallery café.”

These things happen to me all the time….some kind of cosmic resonance! 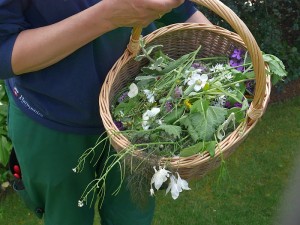 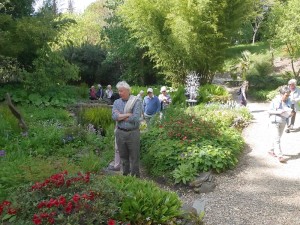 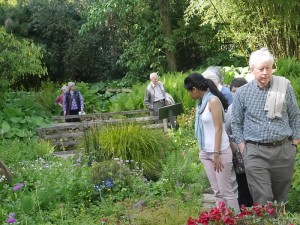 One thought on “Lecture, lunch and edibles tour of the Hillier Gardens”