This Angelica, endemic to the Japanese volcanic island  Hachijo, is unusual because of its yellow sap! There is a lot of interest around the purported medicinal properties of this plant, supposedly promoting longevity. See also http://en.wikipedia.org/wiki/Ashitaba

I first came across this plant in 2004 when I was contacted by a Danish guy, Martin, interested in trying this plant in treating osteoporosis.  He wondered if I knew of a source of seed. After several failed attempts from different suppliers in Korea and Japan, Martin successfully ordered some seed from engei.net.  He sent me a packet to try.  The seed germinated spring 2004, I overwintered the resultant single plant in my cellar. It grew slowly and I think I overwintered again inside, not wanting to lose it. Here are a couple of pictures from 2006 when I was surprised to find that it had yellow sap. I don’t recall eating, probably the yellow sap put me off and put in doubt the correct identification (I found nothing about this sap at the time). I sadly lost it before it flowered…. 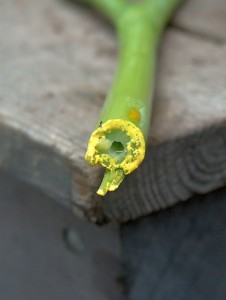 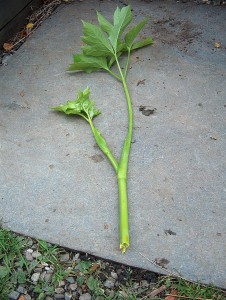