An album of pictures from a trip to the island Chiloe in 2004  on the coast of Chile to see one of the best perennial “greens” from South America, Gunnera tinctoria), one of the 80 plants in my book Around the World in 80 plants. Pangue usually refers to the leaves and nalca to the edible leaf stalks* of this huge plant found throughout much of Chile and Argentina. None of the pictures from this trip were included in the book, probably due to the lower quality of these slides. I’ve now digitised them for all to see! 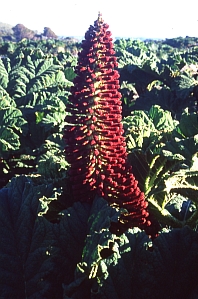 One curiosity  about Gunnera, contributing to its success spreading around the world (e.g., New Zealand and UK to the joy of foragers at least), is that it is the only plant family which establishes a symbiosis with a nitrogen-fixing cyanobacterium.

Darwin visited Chiloe in 1834 and this is what he wrote of this plant:
“I noticed to day growing on the cliffs of soft sandstone some very fine plants of the Pangi, which somewhat resembles the Rhubarb on a gigantic scale. — The inhabitants eat the stalks, which are sub-acid, & with the root tan leather & prepare a black dye. The stalks are called Nalca, so indeed is the plant sometimes. The leaf is much indented in its margin & is nearly circular; the diameter of one was nearly 8 feet (giving a circumference of 24 feet!). The stalk rather more than a yard high: each plant throws out from four to six of these enormous leaves & a group of them hence has a very fine appearance. ”
See http://darwin-online.org.uk/content/frameset?keywords=nalca&pageseq=503&itemID=EHBeagleDiary&viewtype=text

*From my book Around the World in 80 plants: “The most common way of eating the peeled nalca is either raw (some people swear
that this is the only way to eat it), dipped in salt (like the British do with celery) or salt with merken (this is a ground mix of dried, smoked chilli with various seasonings such as cumin, coriander and salt). It is also prepared in salads such as nalca with apple, lemon and a little salt or alternatively with merken, onion, lemon and cilantro. It is also served with a local South American fungus dihueñes (Cyttaria spp.) seasoned with salt, olive oil, chives and cilantro.”

One thought on “Nalca and the food forests of Chiloe Island in Chile!!”