Back in the 2000s most of the interesting amateur plant breeding work was discussed on the Homegrown Goodness forum. That was the first time I heard about work on developing perennial grains through crossing modern day varieties of rye and wheat with perennial relatives. In particular, there was Tim Peters’ Perennial Grain Project in Oregon and one of the first releases was his Mountaineer Perennial Rye developed through crossing perennial wild mountain rye Secale montanum with modern rye Secale cereale.
Although I had no ambitions to work on breeding grains, but along with perennial vegetables, it opened new possibilities for climate-friendly grain production with plants that could potentially produce over several successive seasons, requiring much less energy input, and with their extensive root systems requiring both less fertiliser and irrigation and hence more robust to climate extremes with less erosion.
Reports were that although lower yielding, they were shatter resistant, easily threshed and good for poor soils: it was reported that it tends to live longer on poorer soils (2-4 years on rich soils, 7 to 8 on poorer soils).

I was keen to try Mountaineer in my climate with significantly colder winters than in Oregon and where it had been tested in France and the Netherlands in Europe. I finally got hold of seed in 2013, but didn’t get round to sowing the seed until spring 2015 (in retrospect, I could have autumn sown) and planted 7 plants in June 2015. The plants proved hardy enough and overwintered twice, flowered well but all the plants seemed to be sterile. They died winter 2017-2018. I decided to try again and about 10 new plants were planted in May 2018. Now this autumn I finally got a small yield (pictures). I will offer a few seeds to members of Norwegian Seed Savers (KVANN) through our yearbook in February and plant a larger number of plants in KVANN’s Vegetable Sanctuary at Væres Venner next autumn!
I don’t know what the status is today with Tim Peters’ grain breeding work. He was also working with wheat and sorghum. Let me know if you know!

I planted a yew (Taxus x meda “Hicksii”) next to the kitchen window mainly for the birds some 20 years ago and the berries  regularly attract blackbirds, fieldfares, robin, blackcap, waxwings and as here a redwing only about 1-2m from me!
Norsk: Svarttrost, gråtrost, rødstrupe, munk, sidensvans og rødvingetrost!

A delayed Xmas this year, celebrating at the weekend when my daughter is here….spent the wait sowing seed and the 54th milk carton seed tray for 2019, perennials for stratifying outside! Yes, I need a session with Seeds Anonymous (SA)

A family of whooper swans (sangsvane) flew over the house today!

Hooded crow (kråke) having a nice old scratch, peering down to the photographer! 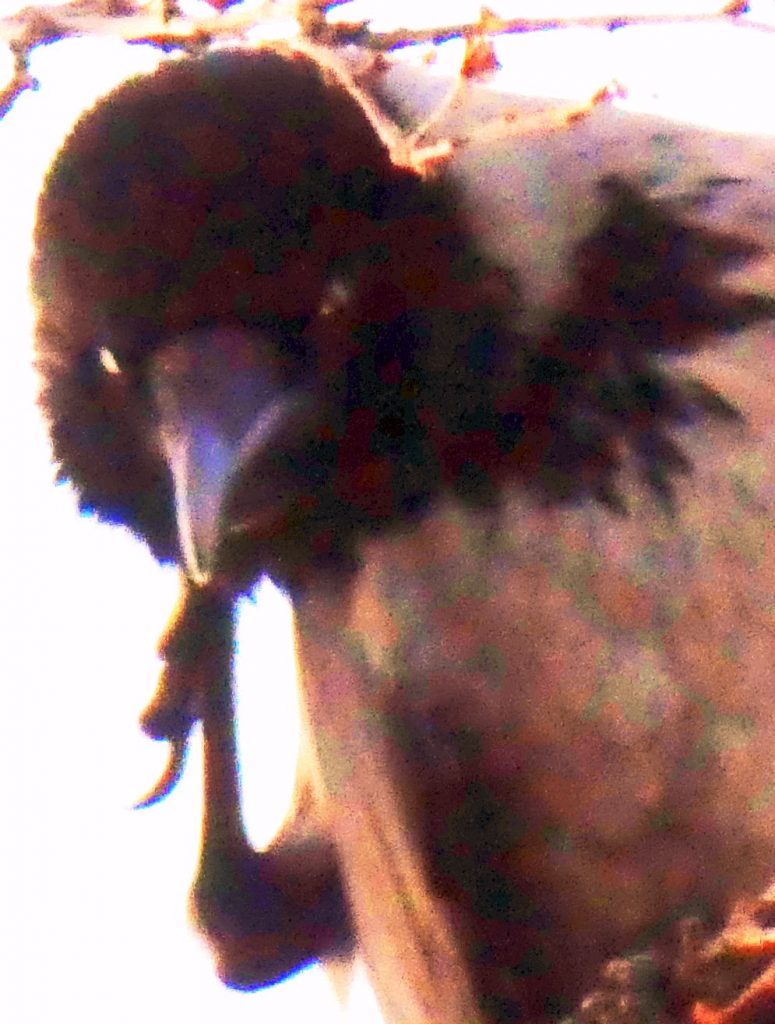 It’s best to keep your distance when there’s a red squirrel nearby.  Given the chance, a squirrel will take birds.
With bramblings (bjørkefink), tree and house sparrows (pilfink og gråspurv).

I also grow Viburnum opulus (krossved) near to the house. This is an uncommon wild species around here. The berries aren’t the first choice for waxwings (sidensvans), but keep the birds around later in the year as they start on them as soon as other berries they prefer are gone. These berries are now gone (a flock of 300 birds doesn’t take long).

Redwing (rødvingetrost) is a bird that seems to have become more common in winter here. I’ve recorded this species 4 of the last 10 winters here. I never saw it in winter the 30 winters before that!

After the storm some days ago now, it was interesting to see how evenly the seed from Norway maple / sycamore and birch (spiss- og platanlønn og bjørk) was spread evenly over the whole garden…it’s easy to imagine how the more open parts of the garden would quickly transform to forest given the chance!
Most trees had an enormous production of seed and berries this year following the hot summer  in 2018 and mild winter last year.