4 years ago in May 2011, my friend Radix the rootmaster blogged the first of a series of blogs about (not) tampering  with his Yampah:   http://radix4roots.blogspot.co.uk/2011/05/dont-tamper-with-my-yampah.html?_sm_au_=icVfQTq7fZqqjNFs

Well, I didn’t, as at about the same time my very own yampah seeds were germinating. They came from a guy called Steve who I traded a bit with a few years back through the good old Homegrown Goodness forum.

Perideridia gairdneri (Gairdner’s Yampah) was an important wild crop, even a staple,  of Native Americans in Western North America including the Blackfoot, Paiute, and Cheyenne. They were so popular that they were over-harvested in many places. The nutty tubers  are said to be crunchy and mildly sweet, and were  baked or steamed.  The seeds have a similar taste to caraway and were used as a seasoning , hence the secondary name Indian Caraway.

I’ve just looked up Steve’s address and I discovered that this autumn I was really very close to Steve’s home in Twisp, WA in the US! My friend Matt van Boven had taken me on a trip up into the Cascades to see some nature and the areas burnt in the devastating forest fires. We turned back at Ross Lake (picture). Another 73 miles on the same road and we would have been in Twisp, near where my Yampah seed had originated (a twisp of fate? – well almost…)

More of my trip up into the Cascades and Matt’s wonderful Feral Farm Forest Garden project as soon as I get time…not forgotten!

Steve wrote at the time : “I have my own patch of Yampah, so I can try sending you a few tubers of that one too (P. gardnairi).  May have to shovel off snow and see if the ground is thawed in Feb or March for that.  Intend to obtain some seed from several other species this coming season.  They take about four years to obtain a useful size is the problem, however, information from those growing Redroot Yampah (P. erythrorhryza) suggest a four year size root can be obtained in a year if conditions are controlled just right in the greenhouse. ” (I eventually received seed, not tubers, of the Twisp Yampah)

Well, I had been warned that it would take 4 years to reach a “useful size”. 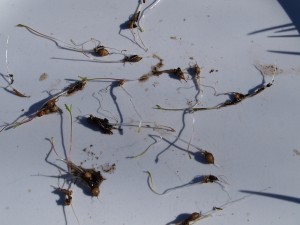 The resultant plants were spindly grass-like specimens, but at least they survived our winters.  As Mr. Radix writes : “They have a feathery, graceful ephemerality about them which doesn’t exactly inspire confidence in their productivity…………………..”.

I realised that they are now 4 years old, so what does “useful size” look like. I dug them up yesterday to have a look: 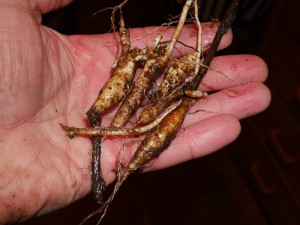 I decided to give them a few more years before inviting to a Yampah feast and replanted them without tasting! My plants don’t seem to have produced seed either :(

2 thoughts on “Yampah Yield and a Twisp of Fate”