At the end of March 2015, I visited the small town of Riverton (Maori: Aparima) (population 1,430) in New Zealand to give a talk at the Riverton Heritage Harvest Festival!  The invite to give a talk had come about by way of my friend Steve Hart who I had met at the European Permaculture Convergence in Bulgaria. Steve (who is from NZ) and his lovely lady Martina had moved to NZ  that same summer and when I contacted them for suggestions for places to visit / talk, Steve was quick to recommended me to the organisers of the Riverton festival which coincided with my visit! A second contact, Jutta (now Jane) Meiforth who headed the local permaculture group here in Trondheim but who had also moved recently to NZ, wrote to me:   “….you should try to visit the food forest belonging to Robert and Robyn Guyton: http://permaculturenews.org/2013/04/21/letters-from-new-zealand-a-permaculture-food-forest-in-the-far-south/”  The video above convinced me that this event was essential on my tour of NZ (the Guytons were also central organisers of the festival!)

I’d been meaning to post something about my visit to the Guyton’s forest garden and the festival for a long time. What inspired me to do this was a fantastic new video of the Guytons’ food forest which my friend Peat Miller Moss ( a Kiwi who has strong Norwegian connections!). See  https://www.youtube.com/watch?v=6GJFL0MD9fc

If you watch the two videos above you will understand why I think (and hope) that one day Riverton and the Guytons will be recognised as one of the main global origins of the evolution of the New World diversified Perma-order! It really is an inspiring place, particularly as it started as degraded land, and the Guytons have inspired many New Zealand gardeners to plant food forests and, I’m told, have inspired folks to settle in Riverton, resulting in a hike in house prices! Nevertheless, there’s no mention of the Guytons and these  very important developments on the town’s wikipedia page!

Below are 3 galleries of my own pictures from my visit to Riverton.  The first gallery shows pictures from the food forest…unfortunately my best camera failed and it was getting dark and not the best time to visit being autumn….so these pictures don’t really do the place credit!

Finally, a gallery of other pictures taken at the festival which was held at the Aparima College Hall in Riverton

After the festival was a great Pot luck Traditional Heritage Feast on the Saturday night! I remember teaching how to fold your own traditional seed packet sometime that evening. The following link shows how! https://fmanos.wordpress.com/tag/origami-seed-packets
I learned this some 30 years ago from my gardening friend Marie Gaden (now 86) who told me she had learned the technique from an old lady! Here’s one of Marie’s seed packets photographed on her table 2 years ago!

You maybe remember I posted about the real Danish rye bread I made a couple of weeks back? See here
http://www.edimentals.com/blog/?p=835

I wondered what the bread would be like using other grains, so I tried 100% wholegrain oat! Even I though I made it damper than the rye bread (that was a bit crumbly) the oat bread wasn’t such a success and was quite crumbly after 24 hours at about 75C…. 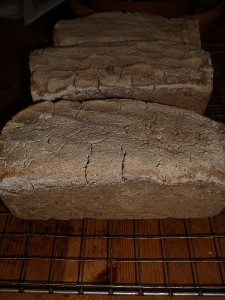 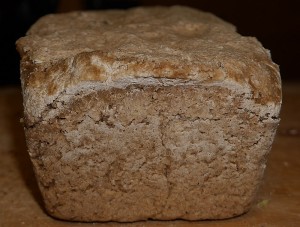 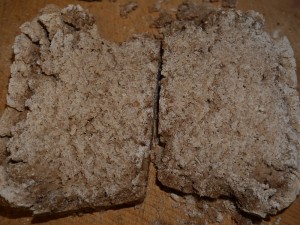 The most hardy winter greens in my garden are mostly rich in sulfur compounds including various onions (Allium) and onion-tasting brassica, Garlic mustard (løkurt), Alliaria petiolata or is it just coincidence that Alliums and Alliaria are both very hardy.
Does the sulfur play a role in giving these plants hardiness? The only other plant that I can harvest a little of in midwinter is Hablitzia tamnoides (although it turns red in the coldest weather).
I finally got the garlic planted today after a week of rain and temperatures up to +10C had melted most of the frost in the soil!
Here are the garlic sorted for planting. This year’s varieties : Aleksandra, Estonian Red, Lochiel, Ävrö, Cledor, Thermidrome, Early Purple Wight and Vallelado (the picture shows all the varieties sorted and ready to plant!). I also planted topsets of varieties with large bulbils to bulk them up (planted close together)!
Some had sprouted as I had harvested them too late…it will be interesting to see if they all make it through the winter! I planted deep this year at about 10cm so that can settle in before the next cold spell!
I also sowed parsnip (pastinakk) today! 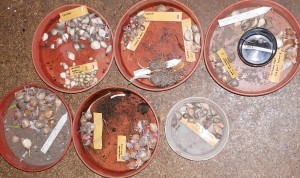 I see long-tailed tit (Aegithalos caudatus) (Norw: stjertmeis) in the garden usually only once each winter. Unlike most tits, they wander during the winter…and a small group of 8 birds passed through the garden today. I usually “spot” them when I hear their characteristic call.  I was planting garlic in the garden and rushed inside for my camera! I was surprised to see them foraging on the ground under the bird feeder. I can’t recall seeing them taking food from my feeder before, nor seen them on the ground. However, they had gone again after about 15 minutes. It’s the white-headed rase (ssp. caudatus) we have here!
Long-tailed tits was one of the few birds I recognised in Japan in the spring! 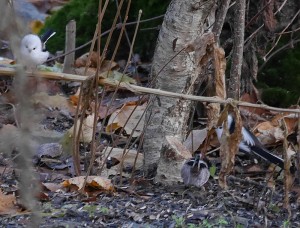 It was a false alarm when I wrote last week that the sun had set and wouldn’t rise again until mid-January. From my desk in the living room I noticed a bright light through my indoor forest garden…the sun rose and set again in the course of 2 minutes… :)

Proof that swifts (tårnseiler) can stay in the air without landing for 10 months at a time has been announced and they can live for 20 years which means a single bird can fly 4 million miles in its lifetime! Astonishing! Below the link, a short video of birds divebombing my house responding to me playing swift calls to attract them to my nestbox!
https://www.newscientist.com/article/2110650-swifts-break-record-by-staying-aloft-for-10-months-at-a-time/

In early April 2016, on my study tour to Japan, I was invited to the mountain home of Ken Takewaki (and Masama) for a short visit. I wrote about Ken’s home and the shock of waking to new snow after 20C the day before in the lowlands back in April (see http://www.edimentals.com/blog/?p=6357)! Despite the snow, Ken took us on a trip around the local area (Sugadaira in Nagano) and we had a walk around a local wetland nature reserve, before Ken took us on a long walk up through the forest where he had recently taken over a piece of land in a clearing to grow vegetables.  All the signs were in Japanese, so I don’t know the names of many of the plants we saw, but here’s the pictures:

Chufa – the delicious tubers of the grass Cyperus esculentus