A Xmas post, as for me the Andean tubers are a Xmas treat (picture)

Frederik Christian Schübeler (1815-1892) was professor of botany and manager of the university’s botanical garden at Toyen in Christiania (Oslo) from 1866-92. Not without reason he has been called father of Norwegian horticultural and no doubt also the most important person for home garden diversity in Norway.  He also understood the importance of breeding local varieties of economic plants!  (see http://www.edimentals.com/blog/?page_id=3198).

In recent years, there has been increased interest in cultivating some of the rare tuberous root crops from the Andes, notably Oca (Oxalis tuberosa) and Ulluco (Ullucus tuberosus). It may come as a surprise that Schubeler was growing Ulluco in Oslo in the mid- 19th century as this entry in his major work Viridarium Norvegicum shows (translation below): 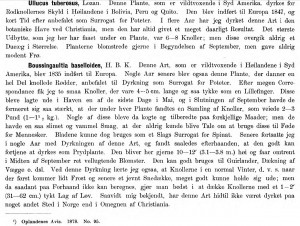 Ullucus tuberosus: “This plant, which is a wild plant in South America, is grown for its tubers in Bolivia, Peru and Quito. It arrived in Europe in 1847, and soon afterwards was recommended as a potato surrogate. I’ve cultivated this species in the Botanical Garden in Christiania (Oslo) for several years, but it’s always given me a very poor yield. The biggest yield has been 6-8 tubers, but they weren’t bigger than a pigeon egg. The plants flowered from the beginning of September, but didn’t produce any seed”

The following entry is Boussigaultia baselloides is almost certainly Madeira Vine (Anredera cordifolia) although B. basseloides is given by the Plant List to be a synonym of Anredera baselloides, a separate species: http://www.theplantlist.org/tpl1.1/record/kew-360631
Schübeler writes among other things that “this species was recommended as a potato surrogate”, “he planted tubers at the end of May, and by the end of September there was  1-1.5 kg under each plant”,  “ …they were cooked, but were so slimy and nauseous tasting that they never could be considered to be food for humans”, “…the leaves could, however, be used as a surrogate for spinach”, “it would nevertheless be worth growing as an ornamental”, “I learnt that in a normal winter with good snow cover they would survive outside but this couldn’t be guaranteed, so it’s best to a 30-60 cm thick layer of leaves” and “As far as I know, this species hasn’t been grown elsewhere in Norway”