During the first weekend in May 2019, about 30 members of KVANN (Norwegian Seed Savers) assembled in Trondheim for our Annual meeting weekend!

On the Friday evening, we showed the film Seed: The Untold Story, a thought provoking film about the importance of diversity, the tragedy of industrial agriculture and multinational seed companies and hope! The picture on the screen shows one of the most important seed savers in the history of Seed Savers Exchange (SSE) in the US, Will Bonsall!  In my 2003 SSE Year Book, he offers a staggering 2,133 different grains and vegetables including 80 Jerusalem Artichokes, 503 potatoes, 76 radishes, 55 barley and 279 beans! This is Mr. Diversity (see below for his full listings in 2003)! 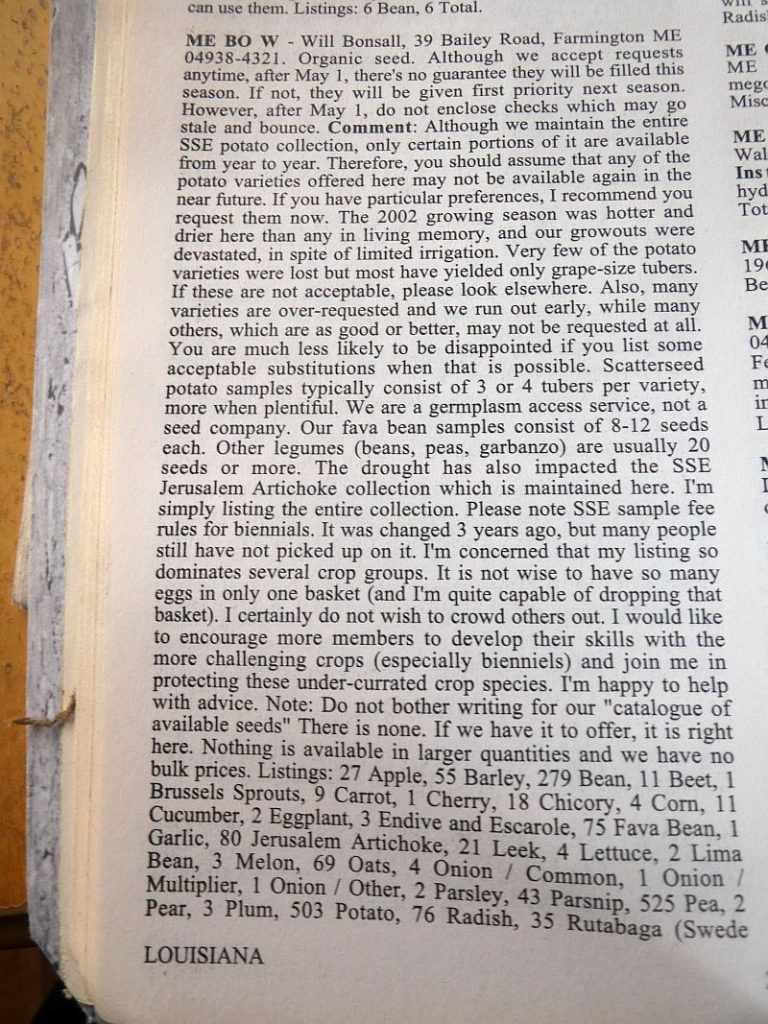 Saturday morning was KVANN’s Annual Meeting, again in the meeting room of the Administration building at the Ringve Botanical Garden (Trondheim) where I have an office:

After lunch, we had a series of talks, first from Vibekke Vange, leader of the Botanical Garden, a general introduction to the garden and work done on conservation of plant genetic resources. 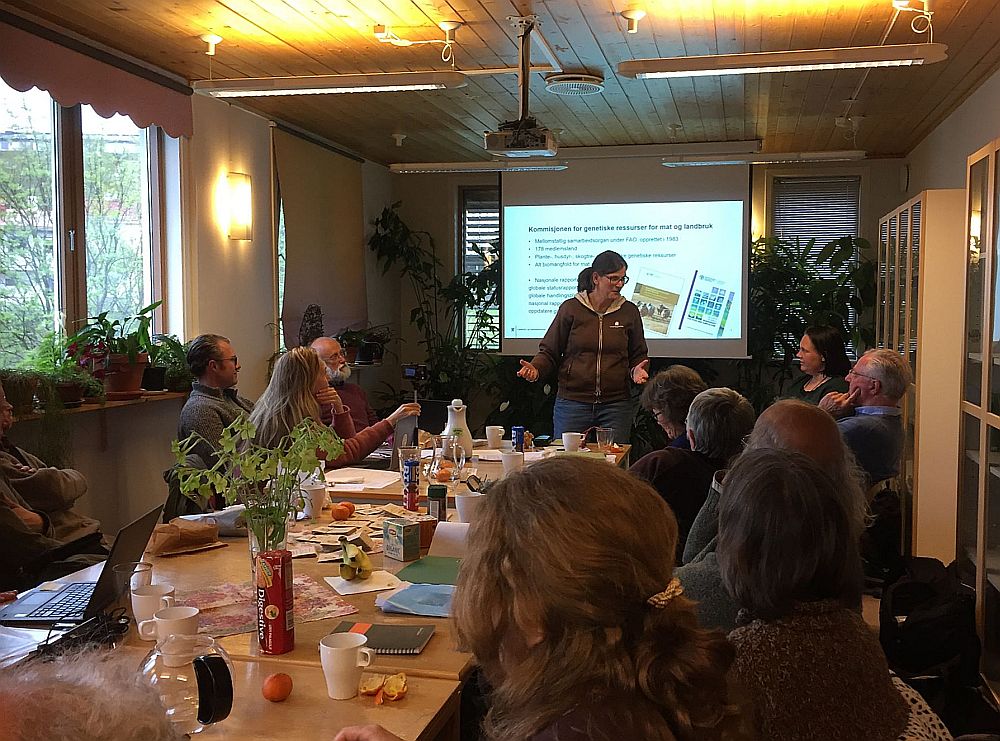 Next up was Anders Nordrum of datsja.no, who gave an engaging talk about the almost total lack of food preparedness in Norway and what each of us can do about this. To learn more about Anders who lives in the Norwegian mountains in Valdres, I’ve written about his Preparedness garden here (in Norwegian):   http://www.edimentals.com/blog/?p=22065

Anders is one of two leaders in KVANN’s group (laug) working on garlic and has also just started testing how well a selection of perennial vegetables grow at his mountain summer farm at over 900m above sea level (he has successfully grown garlic here). 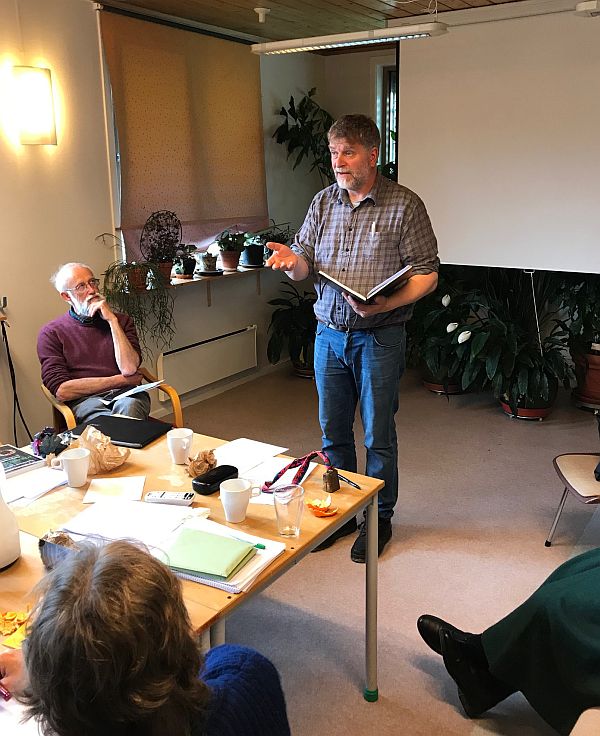 The final talk was by Morten Rasmussen of the Norwegian Genetic Resource Centre who KVANN collaborate closely with…in fact it was they that founded the movement back in 2005 (Planteklubbene; a series of plant clubs dedicated to saving old traditional varieties of useful plants). He gave an update on national work on plant genetic resources. 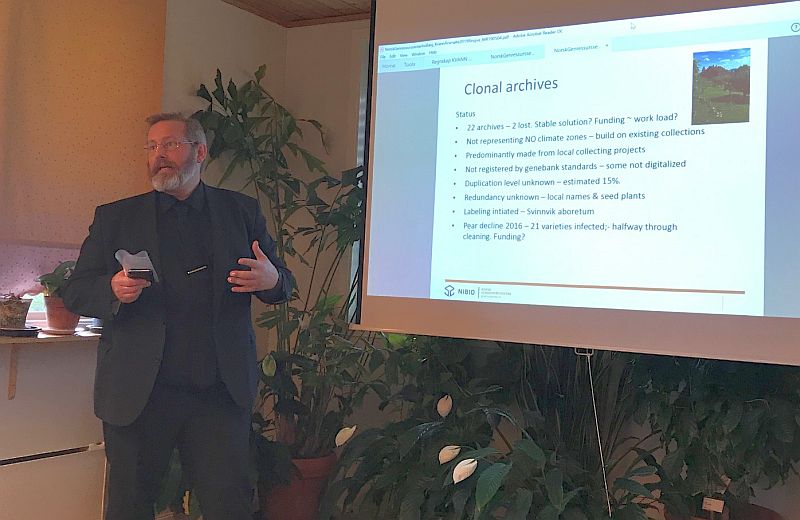 After the talks, Vibekke guided us around the botanical garden with focus on their work on plant genetic resources including the collection of old ornamentals and herbs from mid-Norway, the Renaissance Garden, containing only plants mentioned in Norway’s first gardening book Horticultura from the 1690s and the new Allium garden which I have the responsibility for and gave an introduction to in just about the worst weather our area can provide at this time of year, see https://www.facebook.com/beritboslo/videos/10219078174126065/

After the walk, the Annual meeting dinner was also provided by Persilleriet and for many of us the “short” presentations made by each of the participants after dinner was the highlight of the day! What was planned to be a quick half an hour around the table presentation turned into two hours, illustrating what an amazing diverse group of people that were present!