A highlight of my visit to British Columbia (apart from the plants) was to experience springtime birds in a different part of the world, and most species I hadn’t seen before. There are two albums below plus some videos showing a selection of pictures taken with my handheld Panasonic DNC-TZ80 which has an amazing zoom…
Many of the pictures in the first album from Victoria  are taken from my fantastic Airbnb room which overlooked the harbour!
See further down for an album from Vancouver (mainly in the fabulous Stanley Park).
At the bottom are several videos for your entertainment including Pileated woodpecker, Rufous-sided towhee, two squirrel species, bald eagles, American wigeon, Great blue heron, Northwestern crow, American robin, White-crowned sparrow, Red-winged blackbird, Northern flicker  and American goldfinch

Having a day and a half free in Vancouver before travelling to Quebec, I was keen to visit Stanley Park again! I first visited this remnant old growth forest right next to downtown Vancouver back in the late 80s and was so impressed that they had deliberately left dead trees standing and trees where they had fallen…this is what makes this place so special and rich in wildlife as these pictures taken in a 3 hour walk in the park show. I’ve also included some pictures taken in the UBC Botanical Garden (amazing to look up and see a pair of bald eagles sitting atop a tree in the middle of the garden) and also the Van Dusen botanical garden, both of which I visited on one day!

..and now some videos.
First, a drumming Northern flicker:

Rufous-sided towhee in the UBC garden:

The catttail beds and vegetation around were teeming with birds:

Good to get back to my greens…celebrated with a 34 species omelette (36 with Gallus gallus and Bos taurus)  ;-) 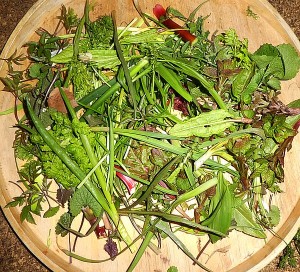 I returned home this afternoon from my 6 city tour of Canada to a beautiful cool day here on the Trondheimsfjord. Spring is further advanced than anywhere I visited in Quebec and Ontario…with many of the early spring flowers now out, blackbirds, robin and chiffchaff singing and an abundance of greens everywhere!