There’s always been a barberry (Berberis vulgaris) in my garden, in dry soil in the root zone of my largest spruce trees. It was a large plant when we moved here in 1984 and may be wild as it’s a common plant on the other side of the bay (Malvikbukta) where it grows on shallow dry soils next to the fjord in company with sea buckthorn (Hippophae tamnoides). It is thought that this species was originally introduced in monastery gardens and later naturalised. It’s nowadays a relatively common but local plant along the Trondheimsfjord, but isn’t found much further north.

I also planted one next to the kitchen window in order to get good views of waxwings (sidensvans) and thrushes (troster) that feast on the berries in autumn and winter: 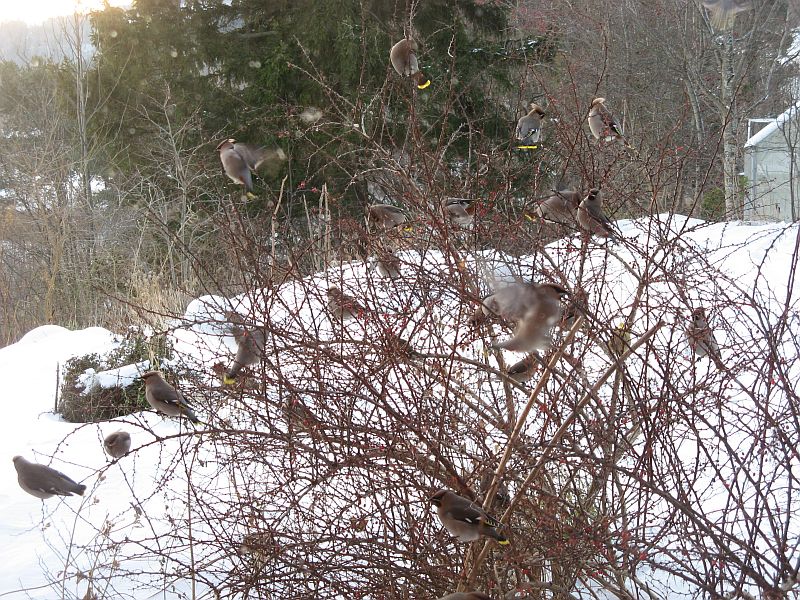 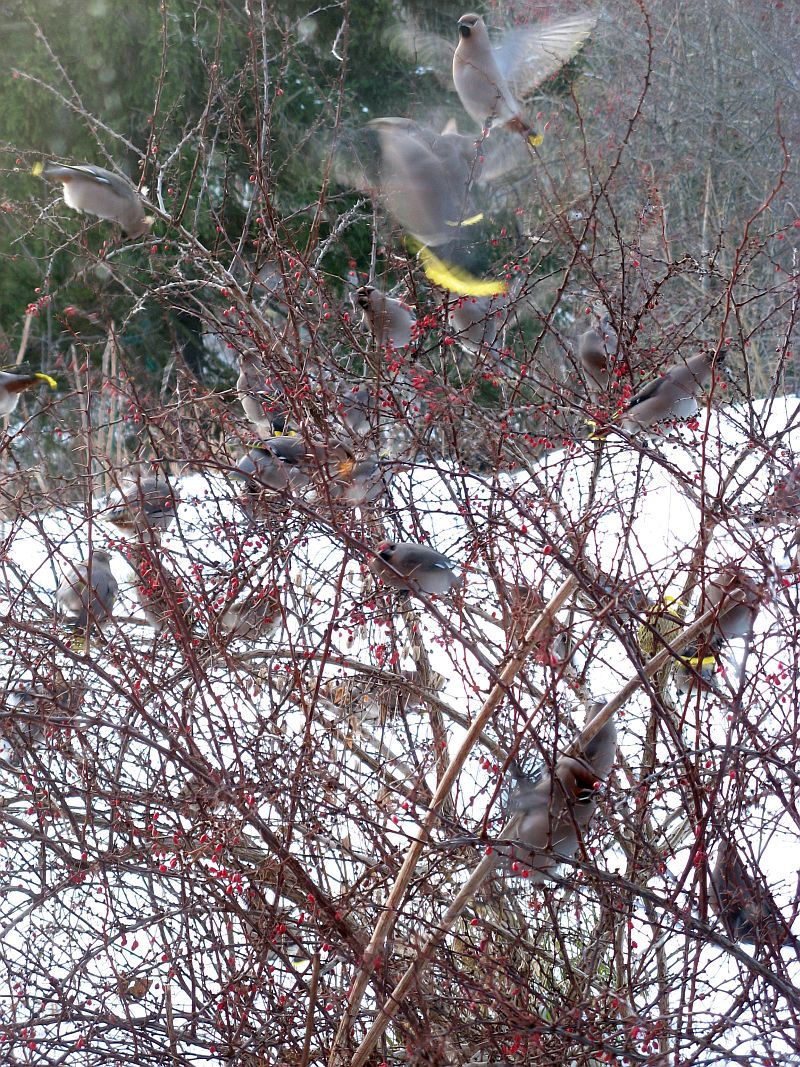 I also have a form with dark berries which I propagated by seed which I received in 1998: 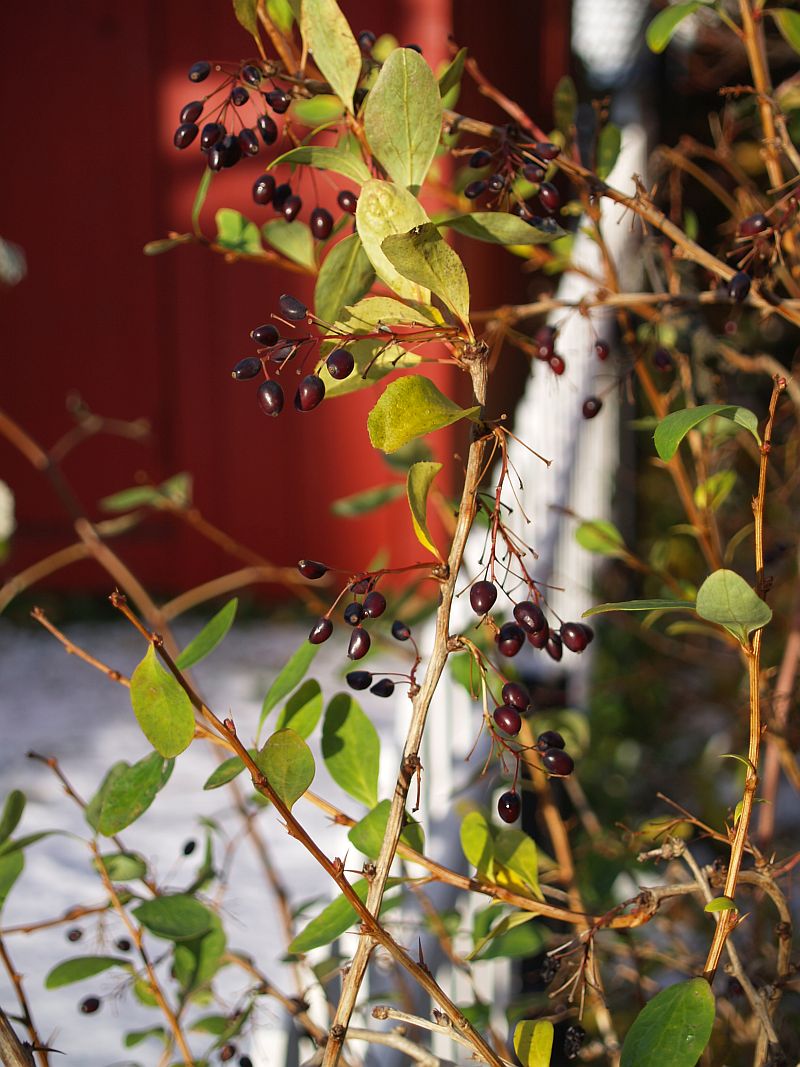 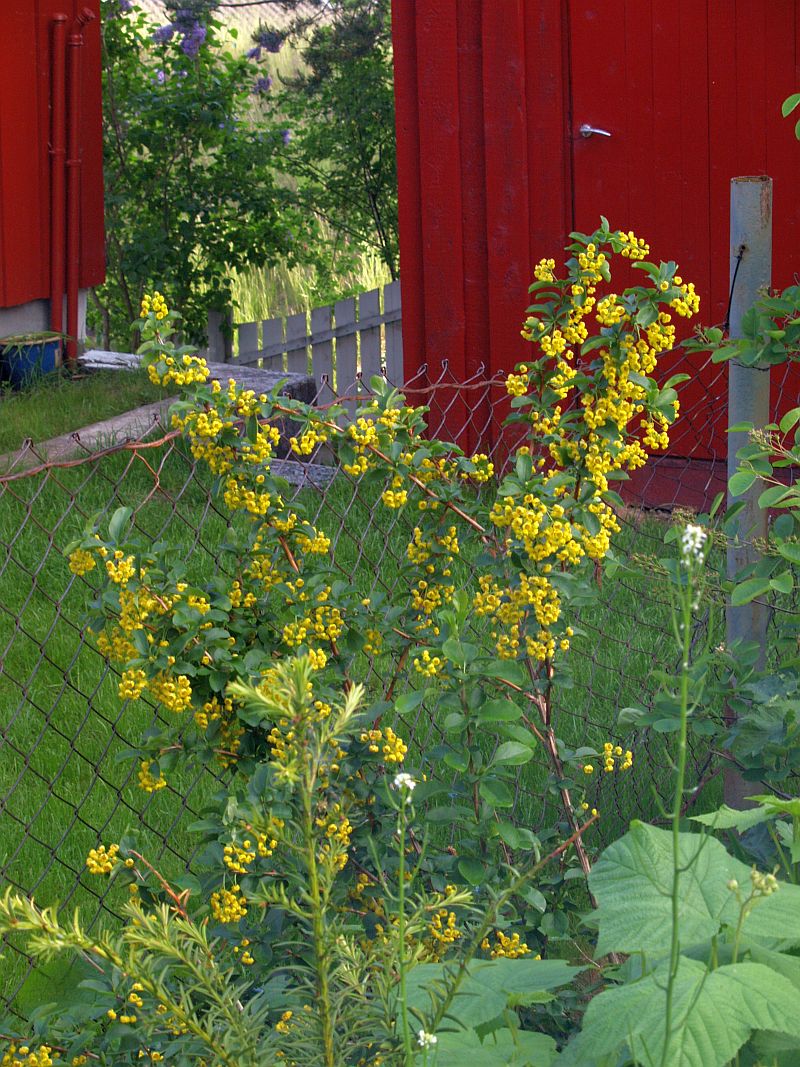 Ethnobotany
There are many species of Berberis, and the closely related Mahonia, which many botanists consider to be a part of Berberis, that have been used traditionally for food around the world. In South America, several species were used including  the fruit of the michay (Berberis microphylla) used by the Mapuche people of Chile and Argentina. Numerous Native American tribes used various Mahonia species both fresh and dried, for jelly and jam, tea, wine and lemonade. In Japan, several species are used for drinks and at least one species is used for a drink in China. 7 species are known to be used in Nepal, both eaten fresh, pickled, distilled into alcohol and in the case of Berberis chitria, the seeds are roasted. Fruit of Mahonia acanthifolia and Mahonia napaulensis are also eaten fresh and pickled. Another Himalayan barberry (Berberis asiatica) is said to make the best Indian raisins.
However, it is in Iran (and neighbouring Afghanistan) that barberries are really an important part of the national cuisine(s), notably zereshk polow (literally barberry rice). The eastern Iranian province of  South Khorasan is the main production area of seedless Iranian barberries on (in 2014) 11,000 ha and over 9,000 tonnes of dried fruit.  Cultivation goes back 200 years or so. Most authors consider that the seedless barberry, which is propagated by suckers, is Berberis vulgaris var. asperma but others that it is a form, or hybrid, Berberis integerrima ‘Bidaneh’ (bidaneh meaning seedless). Difficulty of propagation, the spiny nature of plants and the tendency to yield every other year are problems being addressed.
I like to let the birds, and in particular waxwings, take most of the barberries. However, I normally dry a few for my dried fruit mixes which I have for breakfast once the fresh apples are finished normally from April to when the first fresh fruit is available again in July (see   https://www.edimentals.com/blog/?p=25352). However, this year there were very few waxwings and I dried many more than normal (over the wood stove). 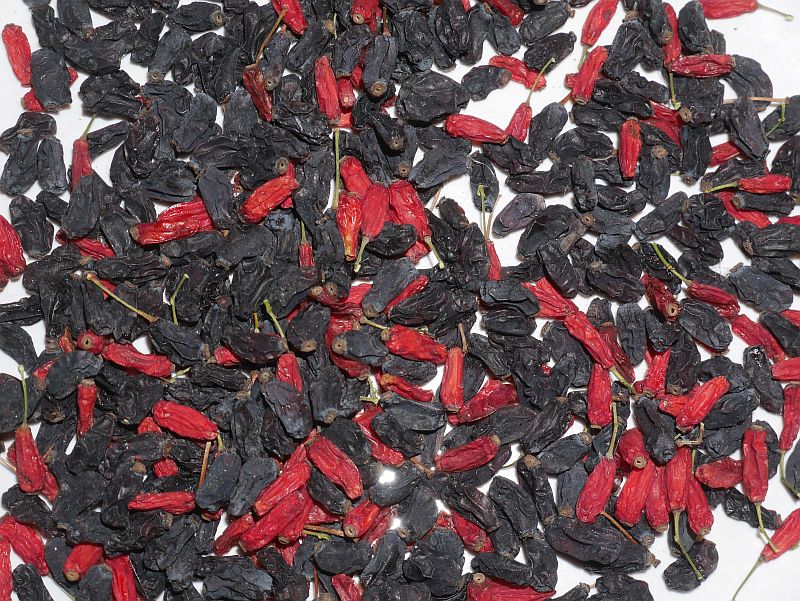 
I’ve been inspired by Persian cuisine many times over the years, like the Persian spice golpar from the seeds of Heracleum persicum and other Heracleum species, now the spice I use more than any other (see https://www.edimentals.com/blog/?s=golpar) and Persian shallots (see https://www.edimentals.com/blog/?s=persian+shallots).
I therefore decided to try using my dried Berberis harvest in various Iranian dishes. The first was just to give a “lemony zing” to rice. I ground the dried berries and just sprinkled on the rice before serving. 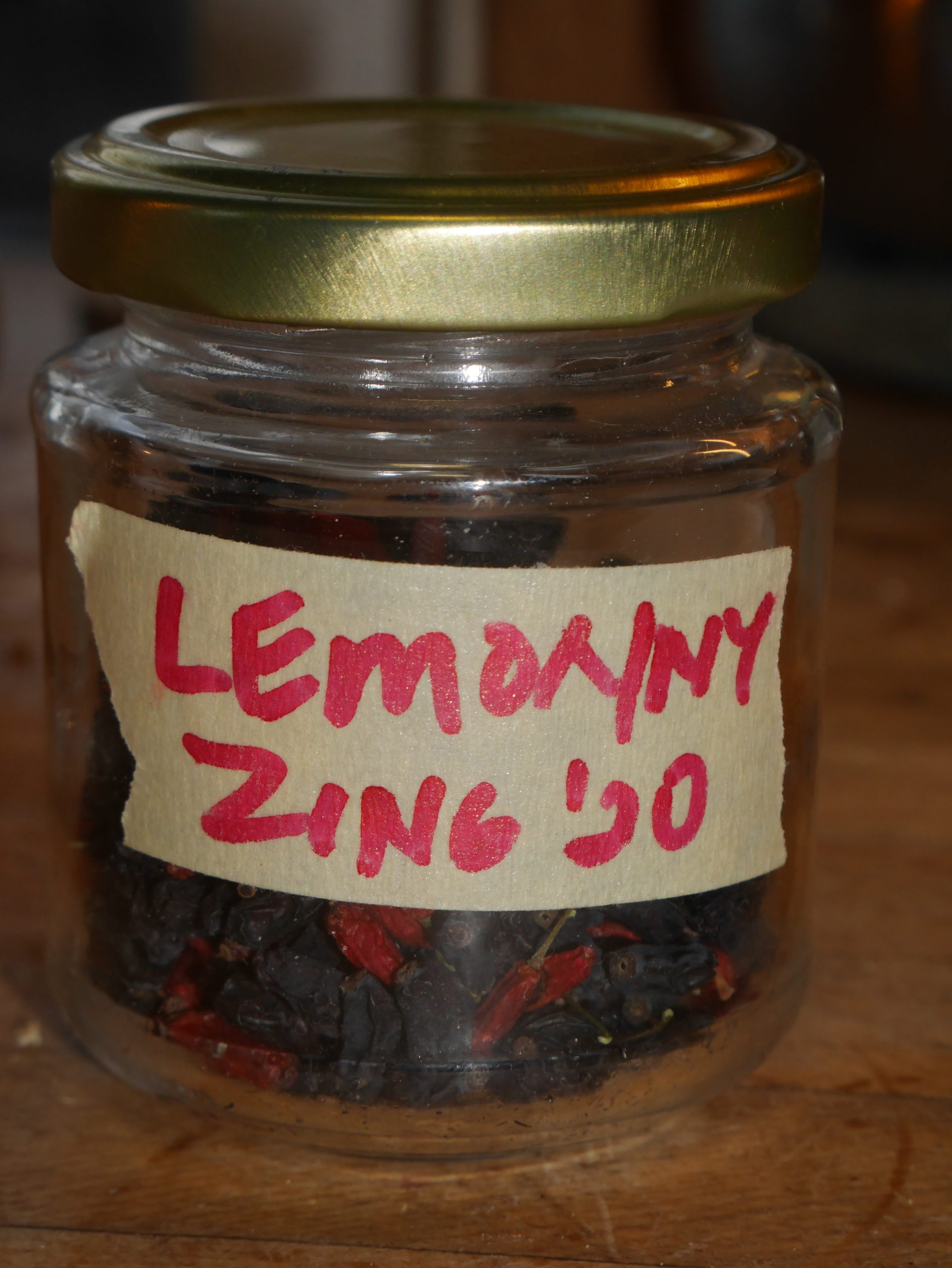 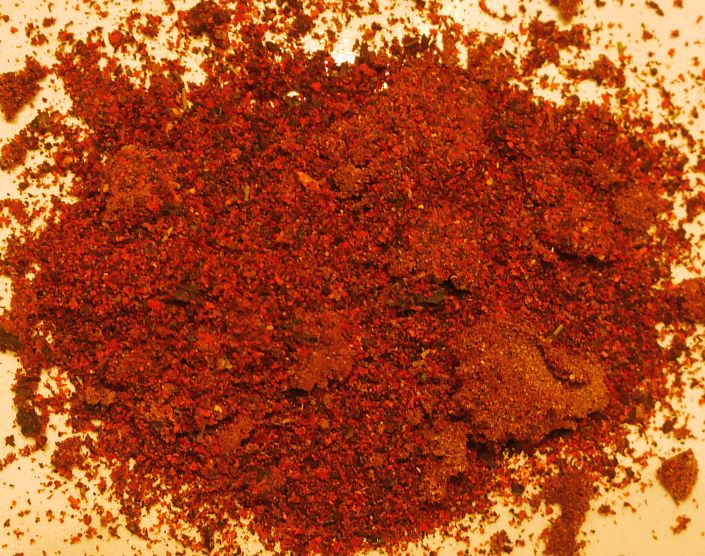 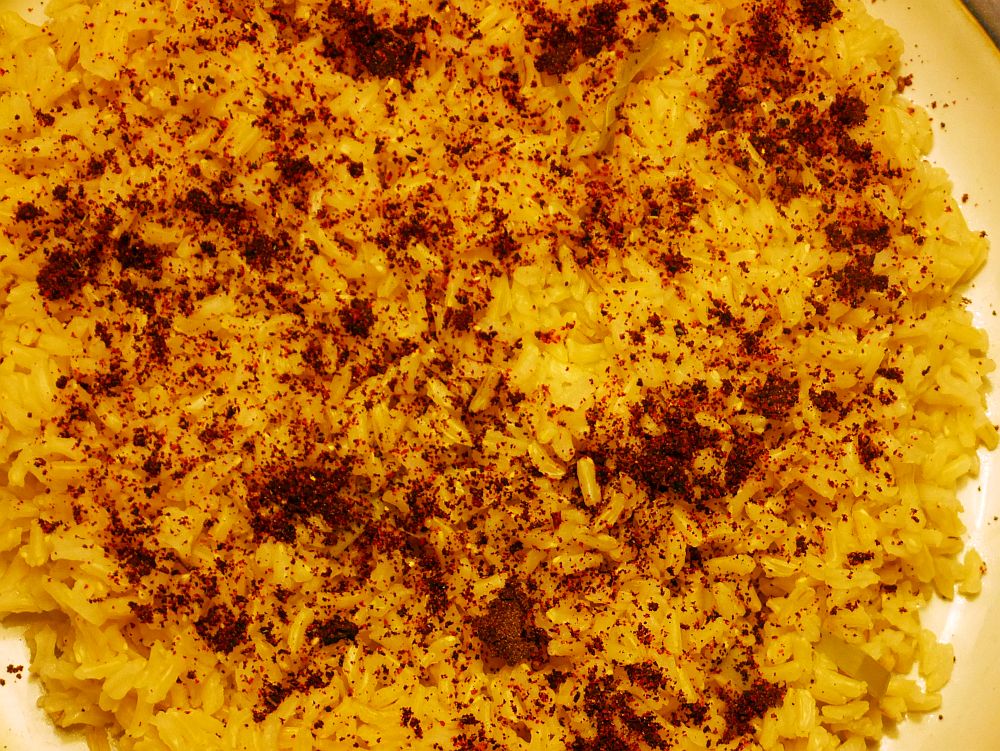 There are numerous recipes for preparing zereshk polow which you can find easily by searching on the net (including youtube videos). It’s either a layered rice dish, but the rehydrated berries are usually sprinkled on the top as a jewel-like decoration. The berries are either rehydrated by soaking in cold water for 5-10 minutes or quickly in hot water. They are also added to melted butter which plumps them up. Saffron is often an ingredient (South Khorasan is also an important production area for saffron). The Iranian spice mix, which often contains golpar (ground seeds or the flower petals of Heracleum persicum). The pilow is usually steamed and often onions, garlic and almond slices are included.  I’d like to adapting this using barley or rye grains in place of the rice.

Other species
In 2011 on a visit to the Dublin botanical garden, I tasted my way through a nice collection of Berberis in fruit and two of them stood out with good taste:

Nutritionally, Berberis fruits are rich in vitamin C (similar to citrus).
In some areas, it may be unadvisable to plant Berberis vulgaris as it is an alternative host for the stem rust Puccinia graminis of wheat and barley. However, modern day varieties are usually resistent.

Heracleum persicum is a giant umbellifer, very closely related to Giant Hogweed another very closely related invasive of more southerly latitudes. We call it Tromsøpalme here as these giant plants might resemble palm trees from afar where they grow in large quantities in the arctic city of Tromsø. I today harvested seed of one last plant remaining after the kommune had strimmed a small coastline stand of this plant, presumably spreading seed everywhere….
The seed is used as an important spice in Iran, something I learned from my friend Saideh Salamati who I credited in my book (she also made an excellent dish of the young shoots at a gathering of foragers here in June). I nowadays use more golpar in my cooking than any other spice…delicious and free!