Hopniss (Apios americana), one of several plants known also as ground nut, is a clambering perennial legume and native american food plant of Eastern North America from Southern Canada to the Gulf of Mexico. For a good account of this as a food plant, look no further than Samuel Thayer’s book “The Forager’s Harvest”. Like many others I’ve tried and failed to grow this and no longer do so. However, it was fun trying and I did at least get  something to eat.
I first planted this 20 years ago in my old unheated greenhouse in October 1999. Hillery Hanby who was a member of the Yahoo group Edible Wild kindly sent me a tuber. It grew weakly and didn’t produce anything. Then in early 2009, Hristo from Bulgaria, one of the active members of the Homegrown Goodness forum persuaded me to try again with his supposedly improved variety and I planted it in the greenhouse in spring 2009. This grew better and flowers were opening on 9th October 2011: 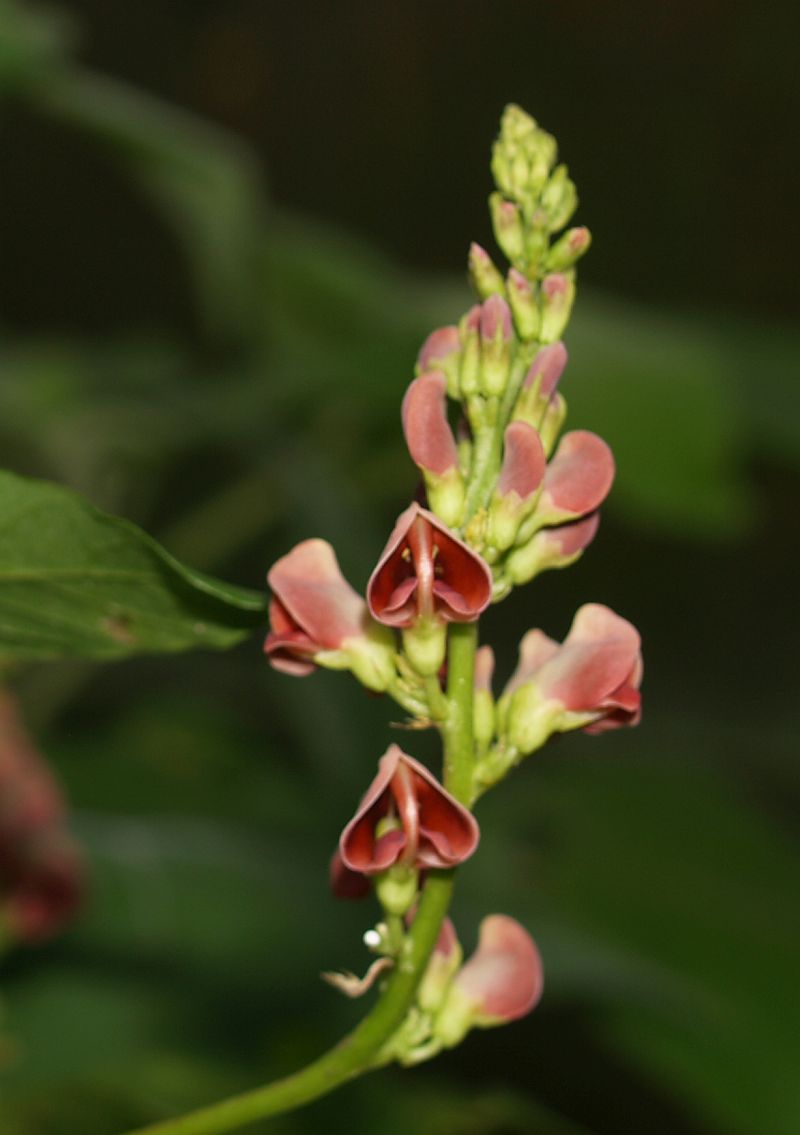 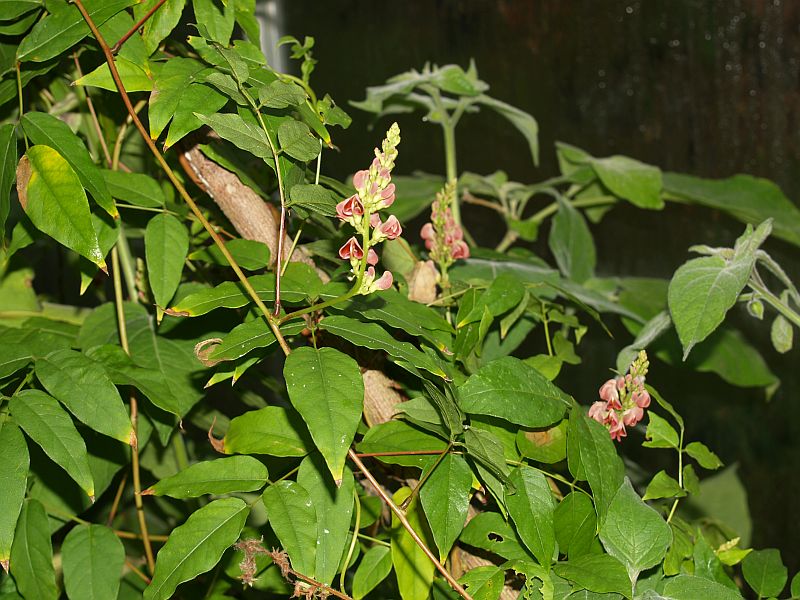 On 13th November 2011 I discovered I had a small yield (this is 3 year’s growth!). The tubers grow on a long string rhizome and Sam Thayer reports from 2 to up to 20 tubers on each.  He also reports that tubers (in the wild) can vary from size of a grape to a grapefruit and shape also varied considerably. 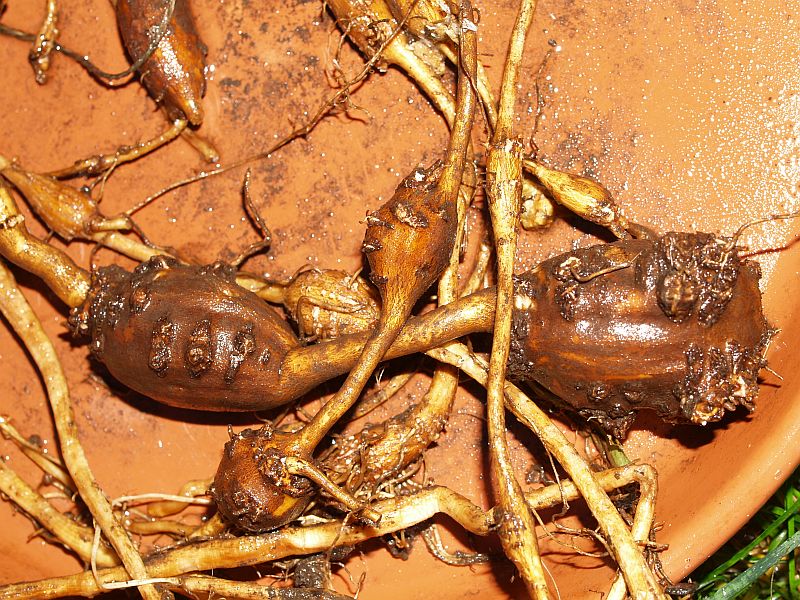 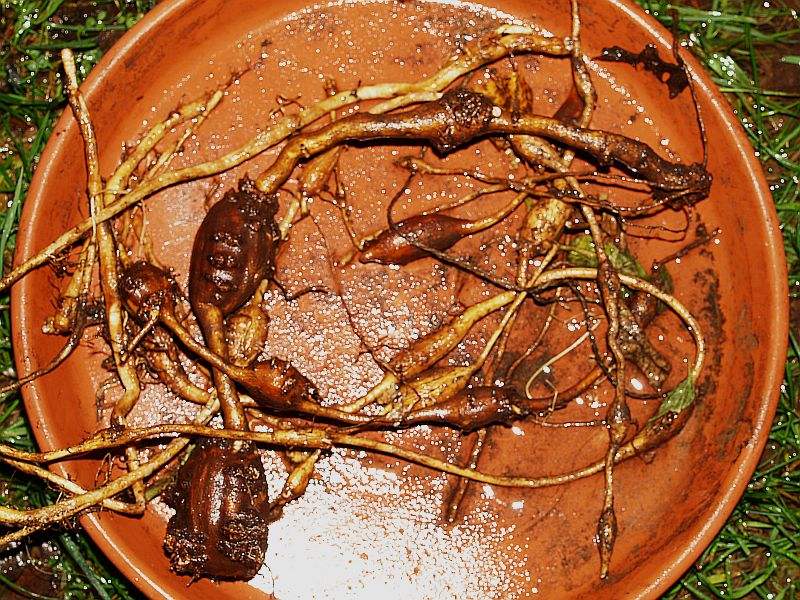 I also had a plant grown in two large pots which I also harvested and both had about 15 small tuberlets on the rhizome that was found winding aroud the base of the pots: 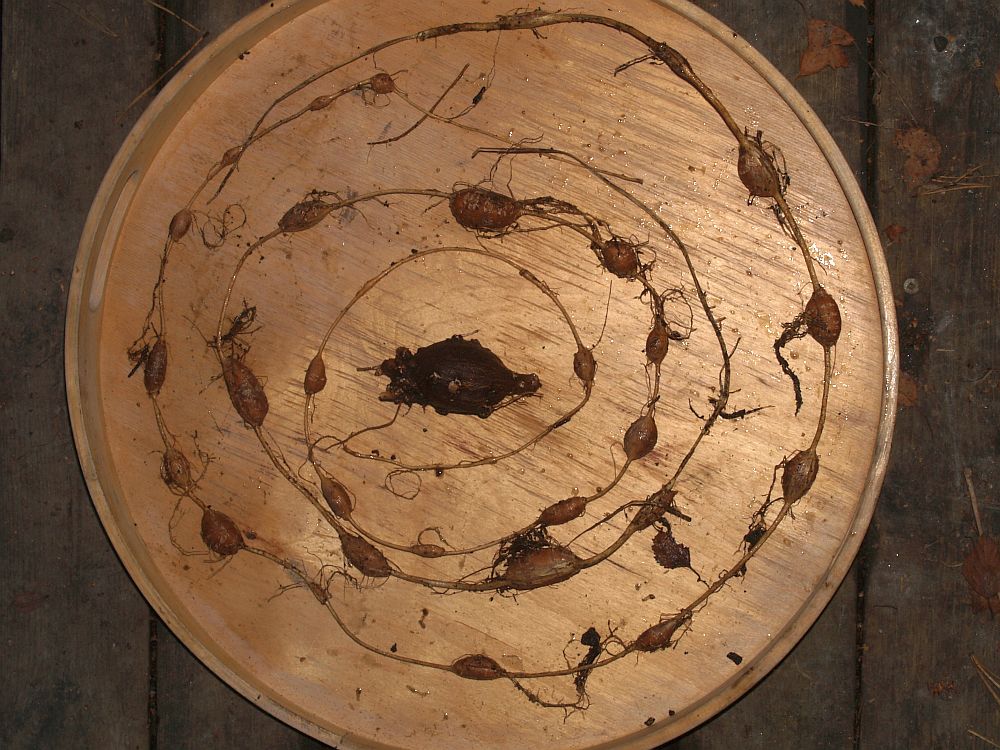 Then, a month later, disaster struck and the greenhouse look like this after  a major storm, Dagmar, devastated this area: 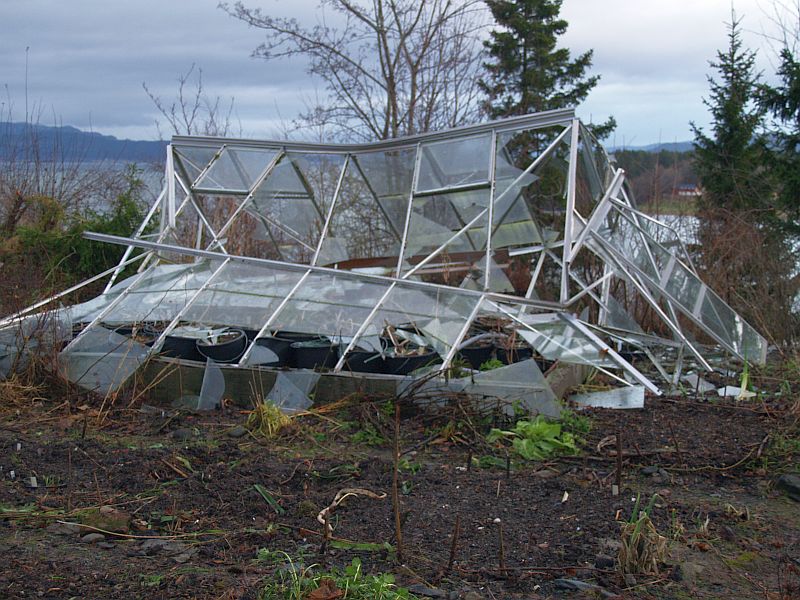 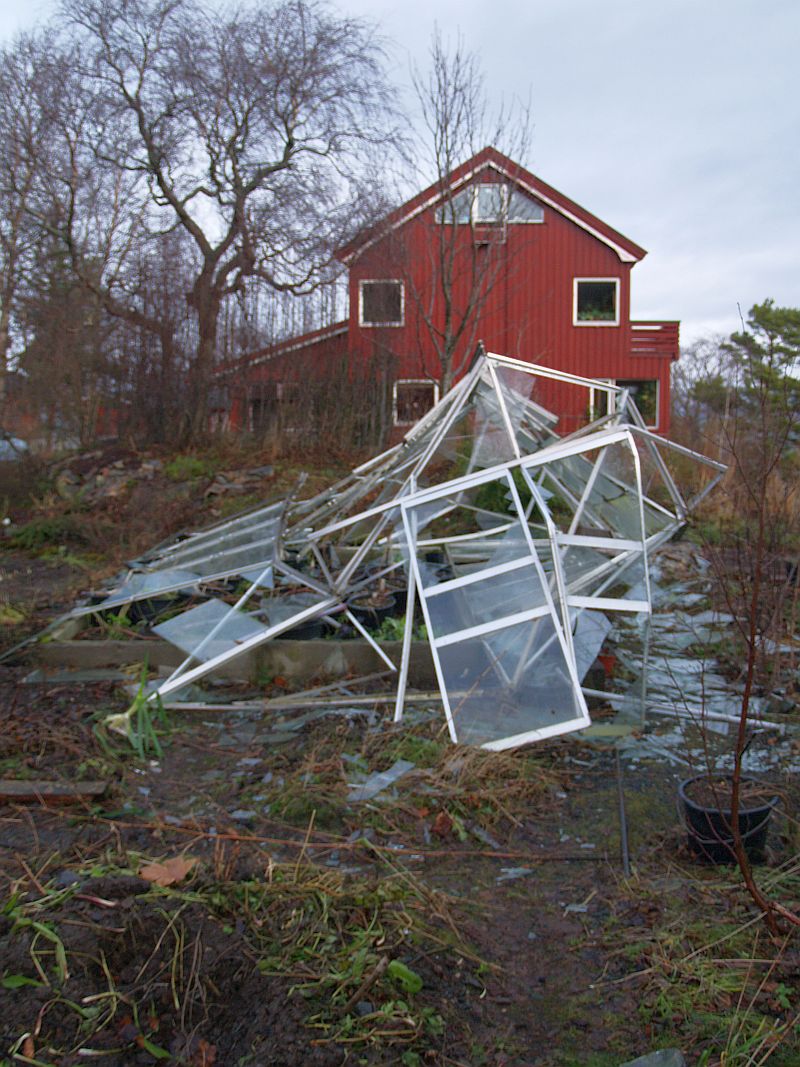 I had replanted some tubers which grew poorly under the new colder conditions without the greenhouse. I was therefore suprised to find my largest tuber “ever” two years later on 26th October 2013: 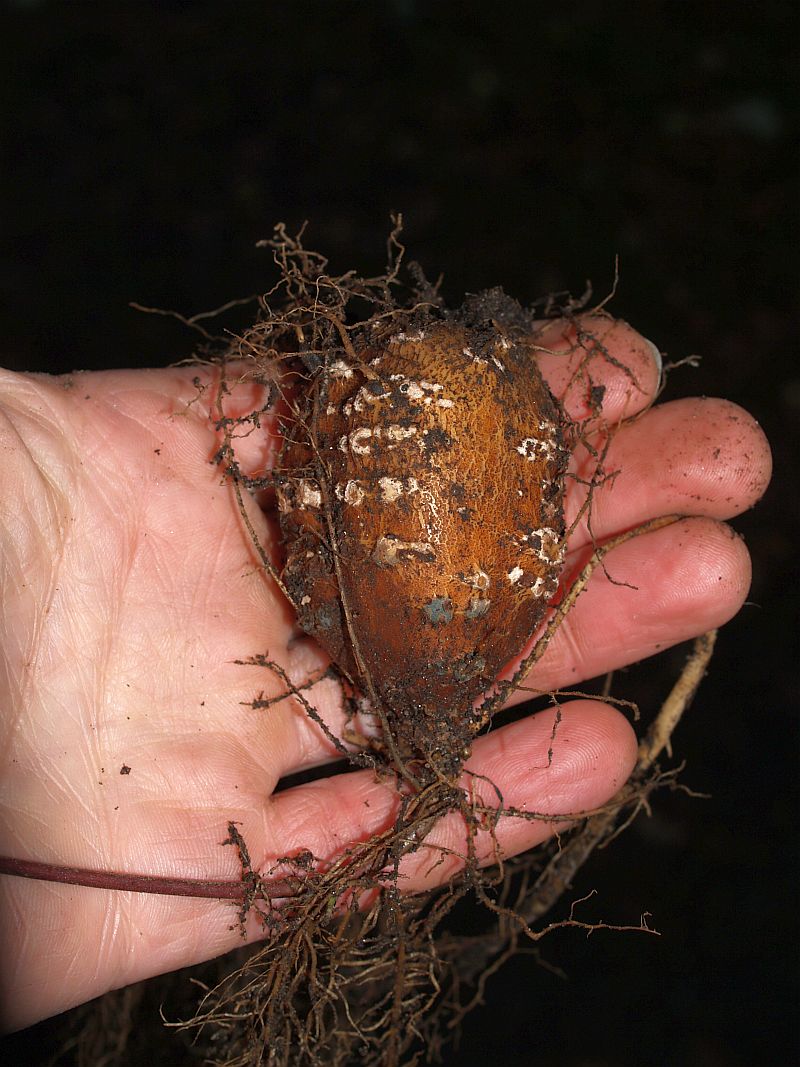 I suspect that I had missed this one in 2011 and this was one was therefore the result of 5 seasons of growth.    Then, in 2014, I took part in trials of new improved varieties.  Søren Holt in Denmark coordinated this trial of 4 varieties received from Gautam in New York. Both Søren, Åke Truedsson and myself participated.  Gautam wrote: “I have just received our latest batch of improved Apios americana, and am taking the liberty of sending you a very few tubers of our best “bunching” and “trailing” cultivars. Will send you the smallest sizes, for convenience in shipping, but not to worry. They come from excellent stock, with excellent size potential”. Here they are on arrival: 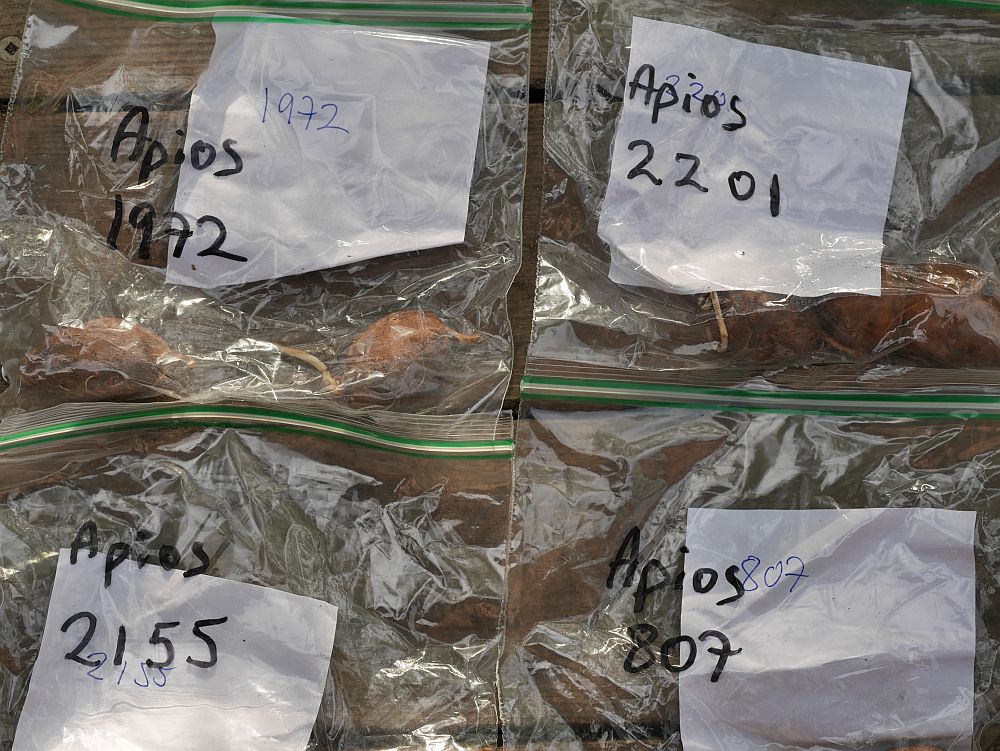 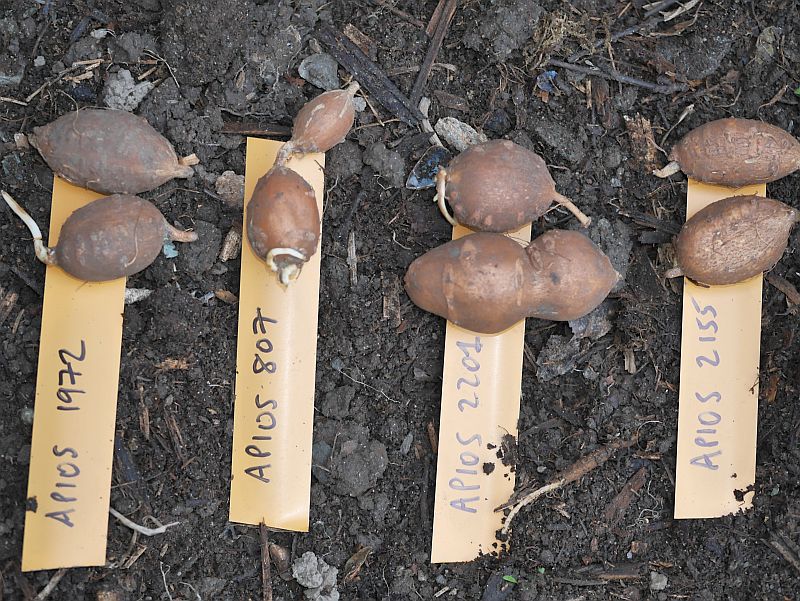 They were planted in a sheltered spot in the garden.  These improved varieties were far from improved enough for my climate and. despite having shoots ready on planting, two of the varieties didn’t even bother to grow and the second two grew so badly that I gave up the trial after a couple of years!
So that’s my experience of hopniss in Malvik. I guess I need to try at least one more time before saying it’s not worth it in my climate.
There is one other species, Apios priceana. This one produces one large tuber, but judging by its wild distribution it is unlikely to be more cold tolerant. I’ve only seen it once, at Joe Hollis’ Mountain Gardens in North Carolina last autumn.