On 1st June, I gave a talk at one of Norway’s oldest herb farms, Nordigard Aukrust, run organically by Ola Aukrust since the 1980s.  This was my first visit although I’d known of Ola’s work for many years! See the pictures below, including a few Alliums in the beautiful herb garden (immediately below is a summer shot taken from a local tourist page!) 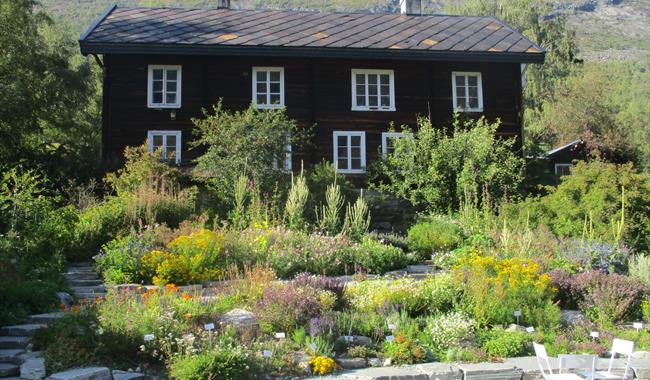 On the bus from the train at Otta to Lom the evening before, I noticed a sign to Valbjør Farm, which my friend and Norwegian Seed Saver (KVANN) Andrew McMillion had visited in 2015. During the visit he had found Allium fistulosum growing on one of the turf roofs and had been given a few onions which he has since shared through KVANN’s Year Book. 10 years ago, I had been on a tour of nearby onion turf roofs near Otta and Vågå (see http://www.edimentals.com/blog/?p=14436). I had heard that there were also onions at Valbjør but hadn’t yet been there. It turned out that the woman who offered to give me a lift from the course at Lom back to Otta, had been at one of my talks some years ago in Heidal. I asked her if we could see Valbjør up on the hills from the main road and told her about the onion roof!  Even better, she said, we’ll make a detour to the place.

So, it came to pass that we spent 45 minutes or so at the farm and met the long-term organic farmer, Kai Valbjør, who had run the farm organically since the 1980s and, it turned out, was one of the open organic gardens in the national Norwegian organic network which we and Nordigard Aukrust were part of!!  It’s all interconnected!! There was also an overgrown herb garden. Valbjør Farm comprises 13 restored buildings from the 17th, 18th and 19th century and is protected by law. A young couple, Ola og Kjerstin Kaurstad, had bought the farm last year and, in particular, Kjerstin was very interested to learn more about the herbs that had survived, despite the neglect. We spent some time looking for herbs and I took a few with me, in case they turn out to be old! There were a few more surprises, see the album at the bottom of this page!

Where did the Valbjør onions come from?
It turned out that the roof onions at Valbjør had not been there for long and had come from another location.  Initial information was that they came from Sve Farm (which I had visited and already had onions in the national onion collection at the Ringve Botanical Garden in Trondheim. Kai Valbjør told that Andrew that they had been given them from herbalist Adi Bertoli at Sjoa. Adi was not sure that it was she who had given the onions to Valbjør, but her roof onions came from seed she was given by botanist Hans Shwenke in Otta (who had been on the tour of roof onion locations 10 years previously). Adi remembered that Hans had his onions from a place called Steberløkken in Kvam. Hans confirmed that the farm was probably called Næsset.