My annual vegetable beds are once again aglow with opium poppy (Papaver somniferum) flowers, my favourite annual edimentals. These are my favourite “weeds” that come up year after year. I’ve planted some 40 different varieties over the years, so there are many colours and flower forms! They need to be “weeded” in order that the individual plants are big! See my grand album of opium poppy pictures here: https://tinyurl.com/y6snlc4r
I collect the seed for using on bread (see the latter album and  http://www.edimentals.com/blog/?page_id=3191) and other baked dishes!
However, great and blue tits compete with me for the seeds, see my blog post on my narcotits (narkomeis)!  The flowers are almost certainly perfectly safe to eat raw, at least in small amounts and you’ll see the occasional flower in my salads.
Papaver somniferum is also one of the favourite plants for pollinating insects such as bumblebees, hoverflies etc., see  http://www.edimentals.com/blog/?p=12787!
Other poppy species have also been used traditionally for food and even the leaves of corn poppy (kornvalmue) are used in the Mediterranean countries (I remember seeing the leaves for sale in a market in Venice some years ago!

More about the uses of poppies from Cornucopia II. I grow all 3 in my garden here in Malvik!

Papaver somniferum – opium poppy (opiumvalmue).  The seeds, called maw seeds in Europe and khas-khas in the Middle East, are widely used in breads, cakes, rolls, milky soups, rice dishes, stews, curries, saladdressings, and sweetmeats. When crushed and sweetened, they are used as a filling for crepes, strudels, pastries, etc. Poppy-seed oil is used like olive oil in French cooking, where it is known as olivette. A paste made from poppy-seed oil and roasted, ground poppy seed is widely used in Turkish cuisine.

Papaver orientale – oriental poppy (orientvalmue). Unripe capsules, though very acrid and hot in taste, are reportedly eaten as a delicacy. In Turkey, the seeds and flower parts are eaten.

Papaver rhoeas – Corn poppy (kornvalmue). Young leaves are cooked and seasoned like spinach, or used as a flavoring in soups and salads. A syrup prepared from the scarlet flower petals has been employed as an ingredient in soups and gruels. They also yield a red pigment used for coloring, especially wine. The seeds are used in cakes, breads, and rolls or pressed for their oil, an excellent substitute for olive oil.

My narcotits* are hard at it in the garden :)
*Narcotit (narkomeis): Both great and blue tits (kjøtt- og blåmeis) systematically open the ripe seed pods of poppies (Papaver somniferum) in my garden for the seeds (I first observed this behaviour some 10 years ago)….they are so keen on this novel food supply that one can speculate that they become addicted (there are low levels of opiates in the seed, maybe enough for a tit!)

Added a few more overview pictures of my vegetable beds intertwined with poppies! No way are these weeds….so the other so-called weeds are just plants doing their job of repairing bare soil that  lack pretty flowers, that’s all! See this page for links to many more pictures:  http://www.edimentals.com/blog/?page_id=1967 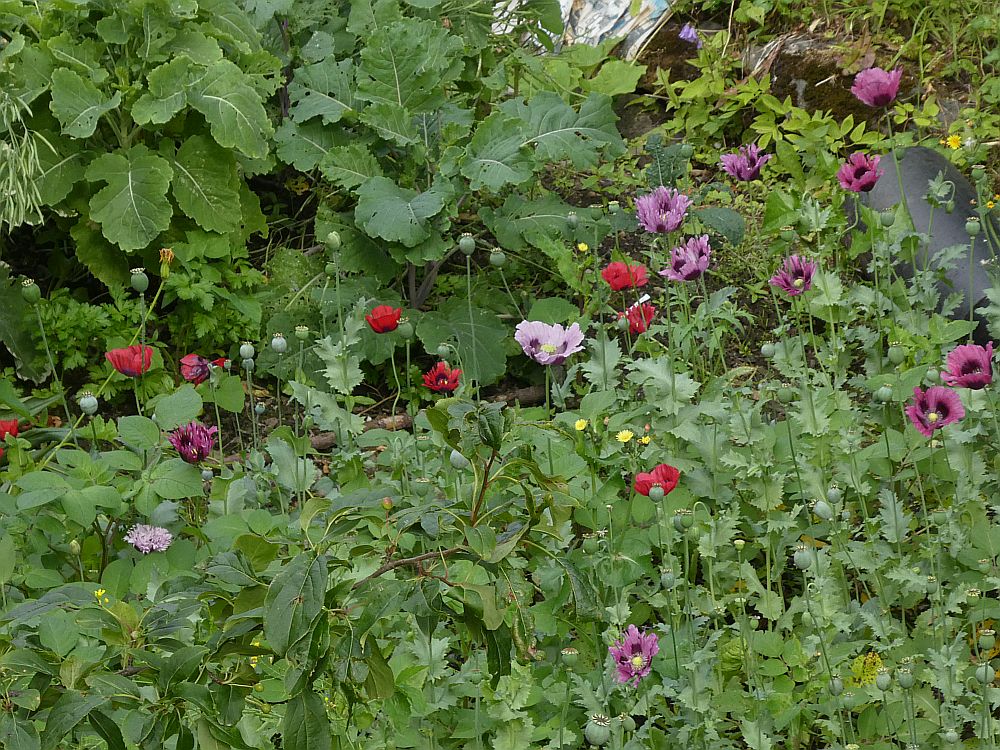 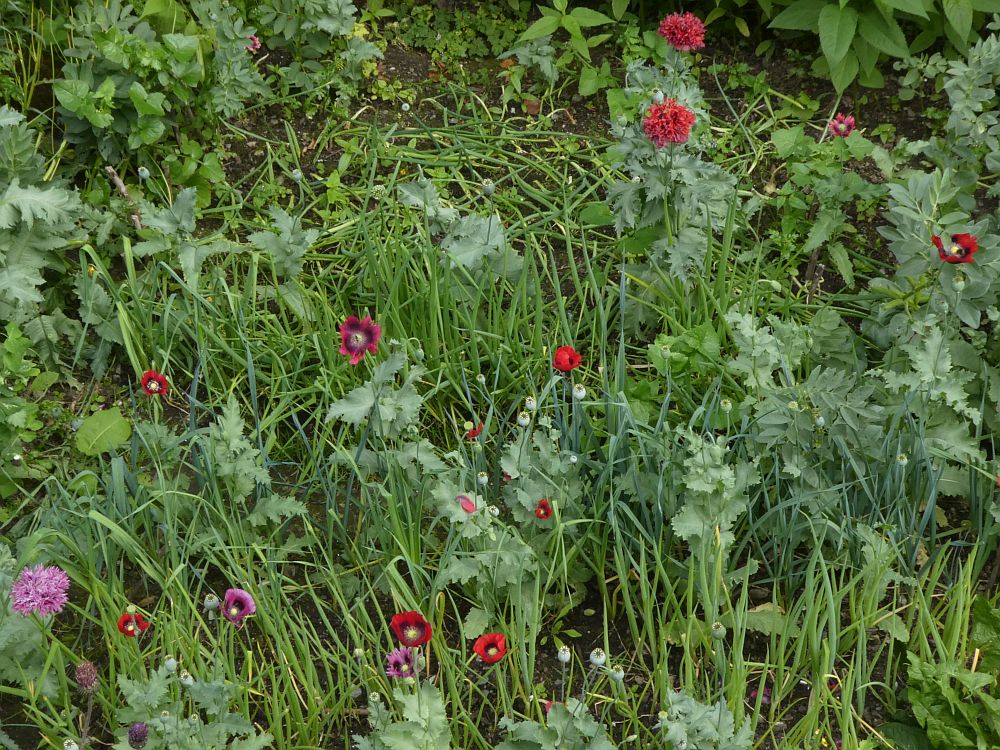 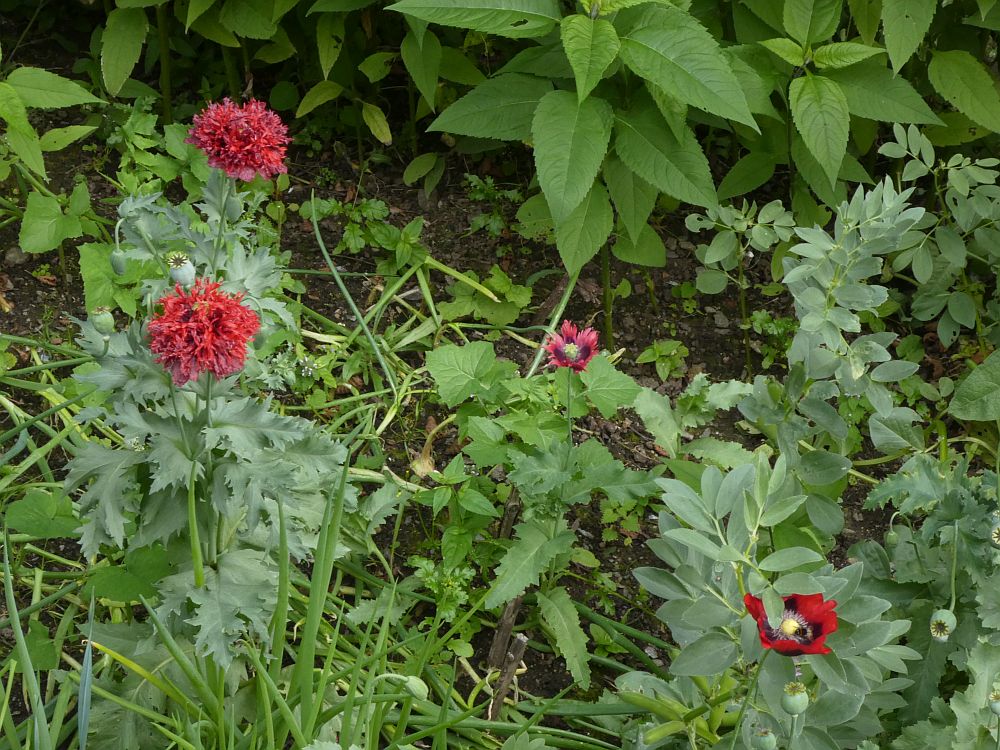 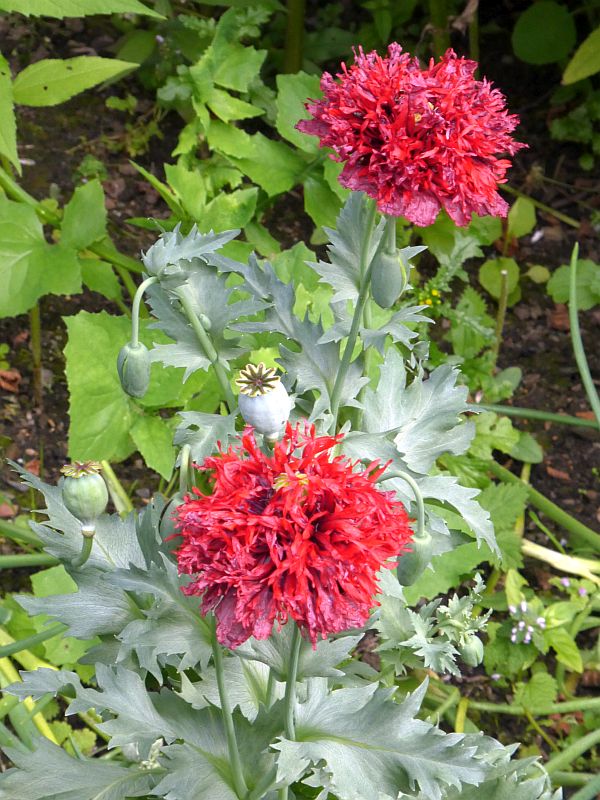 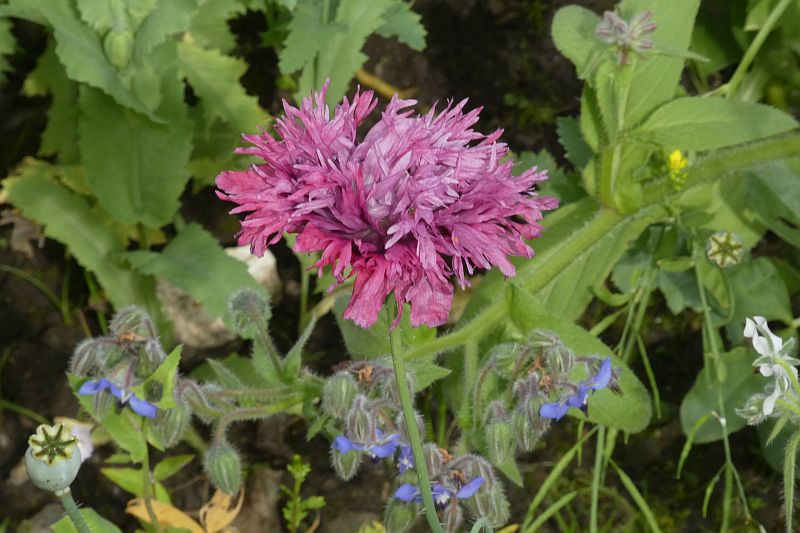